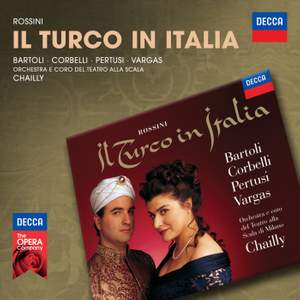 Chailly has recorded the work before, but in the years since he's matured as a Rossini conductor, and the Scala orchestra has this music under its fingers; there's an energy and vitality to this... — Gramophone Classical Music Guide, 2010 More…

Chailly has recorded the work before, but in the years since he's matured as a Rossini conductor, and the Scala orchestra has this music under its fingers; there's an energy and vitality to this playing that's infectious.
For his earlier recording, Montserrat Caballé was an underpowered Fiorilla; but Cecilia Bartoli is full of fire and mettle here (her 'Sqallido veste bruna' is sensational). Michele Pertusi is a fine Selim whose performance seems to breathe stage experience – it's a characterisation that's as vocally fine as it's theatrically adept. Alessandro Corbelli, reinforcing his credentials as a Rossini singer of flair and panache, is a strongly characterised Geronio. This is a recording that smacks of the theatre, and unlike so many so-called comic operas, has lost nothing in its transfer to disc. Under Chailly's baton it fizzes and crackles like few other sets – recitatives are dispatched with the assurance of native Italian speakers, and with a genuine feeling for the meaning of the text. Decca's recording is beautifully judged and the set makes a fine modern alternative to the now classic (but cut) 1954 recording under Gavazzeni with Maria Callas.

this Turco from 1998 shows the idiosyncratic Italian diva at the top of her game as the voracious Fiorilla - her passagework in the fiendishly difficult 'Squallida veste' is quite breathtaking. Alessandro Corbelli is genially sympathetic as her elderly husband, and Ramón Vargas (now associated with heavier repertoire) agile and endearing as Don Narciso.