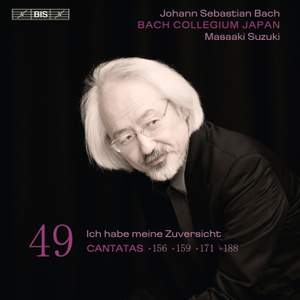 I can't imagine more beautifully long-breathed phrasing than oboist Masamitsu San-nomiya's. But eclipsing all else is the aria that follows, its tenor weaving Bach's logical counterpoint into... — BBC Music Magazine, December 2011, 5 out of 5 stars More…

After 15 years since Masaaki Suzuki and Bach Collegium Japan began recording all of Bach’s church cantatas, this huge project enters the final stretch with its 49th volume.

In the present volume Suzuki has gathered four works from 1728-29, with the texts all written by the poet Christian Friedrich Henrici – a regular collaborator with Bach, most famously on the St Matthew Passion and the Christmas Oratorio

The four works gathered here hint at the variety that may have characterized the Bach-Picander cantata year, with moods spanning from the jubilation of the New Year Cantata BWV171 to the anticipation of Jesus’ path of suffering in Sehet, wir gehn hinauf gen Jerusalem, BWV159, intended for the Sunday before Passiontide. There is also variety on a more technical level, with BWV188 and BWV156 both beginning with instrumental sinfonias featuring important solo parts for organ and oboe respectively.

The latest volumes from the cantatas series have been met with considerable critical acclaim. With Volume 46 being made a ‘Critics’ Choice’ in Gramophone, and BBC Music Magazine singling out both Volume 47 and 48 as ‘Choral & Song Choice of the Month’.

I can't imagine more beautifully long-breathed phrasing than oboist Masamitsu San-nomiya's. But eclipsing all else is the aria that follows, its tenor weaving Bach's logical counterpoint into unison strings and bass...all bathed in the ethereal acoustic of the Kobe Shoin Chapel. I would buy the disc for this alone.

This is yet another high-quality instalment in Suzuki's complete Bach cantatas project, his readings highly polished as usual and seeking devotional depth rather than brilliance for its own sake.