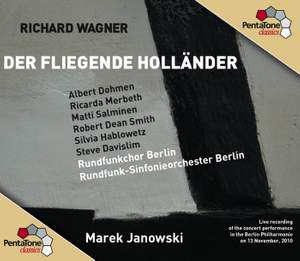 Janowski's conducting is crisp and fleet-footed, shaping the music naturally and fluently...[Dohmen] is a warm anti-hero, but too soft-grained to sound demonically desperate. Matti Salminen's... — BBC Music Magazine, December 2011, 4 out of 5 stars More…

The first in a projected cycle of Wagner’s ten major operas from Marek Janowski and the Rundfunk Sinfonieorchester Berlin stars Albert Dohmen in commanding form as the accursed sailor looking for love, Matti Salminen as a first-rate Daland, and Ricarda Merbeth as a stentorian Senta.

Launching a new complete Wagner cycle comprising all Wagner’s 10 major operas, these were all recorded over a period of 4 years in the Philharmonie in Berlin and all use the same forces of the Rundfunk-Sinfonieorchester and Chor. Conducted by Marek Janowski and performed by a top line up of soloists, this is unique recording feat in a complete Wagner series.

Janowski's conducting is crisp and fleet-footed, shaping the music naturally and fluently...[Dohmen] is a warm anti-hero, but too soft-grained to sound demonically desperate. Matti Salminen's Daland is vocally worn but still amazing for his age. Vocal honours, though, go to Ricarda Merbeth's keen, nervy Senta, and the two tenors...also the clean-cut chorus, which is reasonably dramatically involved.

Here is charm, wit and even kitsch alongside the spooky but never overdone drama. The recording is also first-rate in warmth, immediacy and clarity...the best all-round modern performance of the opera and a good nod towards the original-instrument version of this edition of the score we still need.

It is astonishing that veteran Matti Salminen...can still shine as Daland...but his is the star voice here. Robert Dean Smith gives good value, too, in the tricky role of Erik...Steve Davislim is something of a catch as a lyrically sung Steersman...Janowksi's conducting has a momentum and a sense of abstract theatre which can take the breath away. I won't be jettisoning my allegiances, however, to the older conductors' singers.

Salminen (who made a formidable Hagen in Janowski’s early Ring recording) is now in his sixties but still excels as a first-rate Daland, while Albert Dohmen’s rich baritone gives a convincing and anguished Dutchman...Where this set really scores highly though is in the orchestral playing and choral singing...Janowski pays great attention to detail and you hear all the inner lines.

Recorded live in Berlin, the orchestra and the splendid Radio Chorus are the most impressive elements...The veteran Matti Salminen is still a formidable Daland, but Albert Dohmen’s intelligent Dutchman and Ricarda Merbeth’s committed Senta sound vocally worn and stretched.