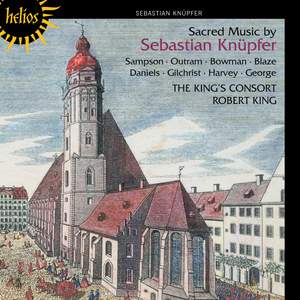 There is no respect in which the vocal and instrumental performances or the recording fail to do justice to a composer whose revival is long overdue. I strongly recommend you to discover this... — Gramophone Magazine More…

I. Was mein Gott will, das gescheh allzeit

Sebastian Knüpfer is yet another Baroque composer whose reputation and popularity have been overshadowed by J S Bach. Little of Knüpfer’s music has previously been transcribed from its many manuscripts, let alone published. However, in his day Knüpfer was a respected and highly soughtafter composer; his compositions were admired by his contemporaries and, according to his obituary, he ‘composed quotations of the Psalms and other Biblical books with such sweetness and skilfulness that he delighted even the saddest hearts, and his name is spoken with admiration not only in Leipzig but also outside’.

As we have come to expect from Robert King and his King’s Consort, the performances are of the highest standard with some of the finest singers on the early music platform today.

There is no respect in which the vocal and instrumental performances or the recording fail to do justice to a composer whose revival is long overdue. I strongly recommend you to discover this for yourselves. Bravo, Hyperion! … the second release in the Bach Contemporaries series reveals a composer of imagination and flair.
The King’s Consort give these rarities outstanding performances

Robert King draws fine singing and playing from his ensemble. The soloists are uniformly excellent … Knüpfer is a real discovery—full marks to all concerned … the combination of education and pleasure is irresistible