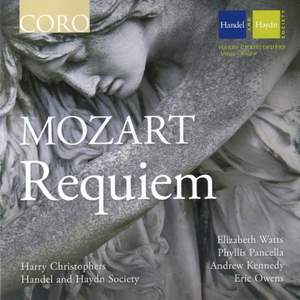 [Owens's] instrument sounds magisterial as it rolls along, matching well with the three remaining soloists. Elizabeth Watts is a luminous soprano. Phyllis Pancella can rely on the almost contralto-like... — BBC Music Magazine, December 2011, 4 out of 5 stars More…

Following the success of the Mozart Mass in C minor last year, CORO is delighted to announce the release of its second recording with Harry Christophers and the Handel and Haydn Society. Celebrated soloists Elizabeth Watts, Phyllis Pancella, Andrew Kennedy and Eric Owens joined Harry and the Society to record Mozart’s Requiem live at Boston’s Symphony Hall earlier this year.

Mozart’s final moments are reflected through this masterpiece of drama, intensity and depth. The mysterious circumstances surrounding the Requiem’s commission (delivered by a ‘messenger in black’ who refused to reveal the identity of the person who had sent him), and the fact it was left incomplete by a dying Mozart, have ensured a continued fascination with the work.

Completed by Mozart’s colleague Süssmayr in 1792, the Requiem is one of Mozart’s most popular and enduring works and one of the most enigmatic pieces of music ever composed.

The CD will also feature Mozart’s Ave verum corpus and the first recording on period instruments of his concert aria Per questa bella mano for bass voice and solo double bass obligato—a piece famous for its fiendishly difficult double bass part, performed superbly on this recording by Robert Nairn.

[Owens's] instrument sounds magisterial as it rolls along, matching well with the three remaining soloists. Elizabeth Watts is a luminous soprano. Phyllis Pancella can rely on the almost contralto-like qualities of her mezzo. Andrew Kennedy's strong tenor makes a direct human appeal. The choir, too, is well blended and nicely balanced, negotiating the fast passages with impressive neatness. Orchestral playing is both vivid and disciplined

a tangible excitement and momentum from one movement to the next makes this interpretation far more exciting than many studio recordings...And what a Dies irae this is. Breathless, barely contained, with brisk and extreme changes of dynamics always grabbing you by the hand and dragging you onwards; it is totally compelling...It's the most consistently engaging and propulsive recording of the Requiem I've heard.

The recording grants welcome clarity to the orchestration, with colle parti trombones particularly audible. Tempi are generally brisk...the performance of [Per questa bella mano] is all one could wish for.