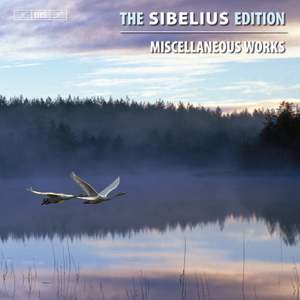 The final instalment in the Swedish label BIS’s Sibelius survey mops up the odds and ends. There’s an incredible range of material strewn across the four discs in this set. Much of it is superb,... — The Arts Desk, 11th February 2012 More…

No. 1. Palmusunnuntaina (On Palm Sunday)

No. 2. Suloinen aate (Thoughts be our Comfort)

No. 5. On kaunis maa (How Fair Are Earth and Living)

No. 8. Veljesvirsi (Ode to Fraternity)

No. 1. Largamente - Allegro (start of movement)

No. 3. Commodo (middle section of movement)

Herr du bist ein Fels (Lord, You are a Rock) (alternative version for choir and orchestra)

No. 2. Suloinen aate (Thoughts be our Comfort)

Masonic Ritual Music, Op. 113: No. 5. On Kaunis maa (How Fair Are Earth and Living!) (1927 alternative version for tenor and harmonium)

Andante festivo, JS 34b (version for strings and timpani)

Volume 13 of the Sibelius Edition focusses on the Masonic Ritual Music for tenor and organ and the complete music for solo organ, but also includes orchestral fragments and a recording of the bells from Helsinki’s Kallio Church, for which Sibelius composed the melody in 1912.

The Edition also features Sibelius himself conducting the Finnish radio Orchestra in a performance of his in his own Andante festivo, recorded in 1939.

As a special feature, one of the discs also include a video file with the classic ‘Jean Sibelius at Home’ film, made in 1927 and 1945 by Aho & Soldan.

This Edition is completed with a bonus DVD of ’Visual Journey to the Music of Jean Sibelius’: Music by Sibelius accompanying sceneries from the Finnish archipelago

With this final instalment a separate booklet with the complete index of the recordings and works included in the entire edition is provided, as a key to the 80+ hours of music that form the lifework of Sibelius

The final instalment in the Swedish label BIS’s Sibelius survey mops up the odds and ends. There’s an incredible range of material strewn across the four discs in this set. Much of it is superb, but this most self-critical of composers didn’t always operate at white heat...All immaculately presented, performed and produced. An essential purchase.