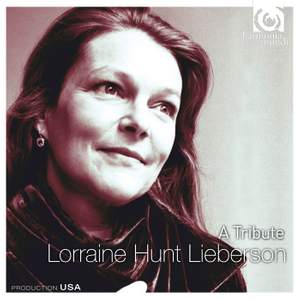 Handel's popular "Angels, ever bright and fair" from Theodora and "Scherza infida" from Ariodante remind us of her musical intelligence and vitality...The final tracks on each disc, Dido's Lament... — The Observer, 24th July 2011 More…

Act I, Air, "Angels, ever bright and fair" (Theodora)

"But who may abide the day of His coming"

"He was despised and rejected of men"

"I know that my Redeemer liveth"

Act III, Thy hand, Belinda / When I am laid in earth (Dido)

Act I, "On Joacim may every joy attend" (Susanna)

Act I, "Bending to the throne of glory" (Susanna)

Act II, "Lead me to some cool retreat" (Susanna)

Act II, "If guiltless blood be your intent" (Susanna)

As a tribute to the artistry of Lorraine Hunt Lieberson, this retrospective gathers together many of the finest recordings of arias and duets made during her acclaimed association with harmonia mundi. The booklet notes include tributes from her husband, Peter Lieberson, Nicholas McGegan and her obituary from Le Monde.

Lorraine Hunt - who became Lorraine Hunt Lieberson after her marriage to the American composer Peter Lieberson in 1999 - was born on March 1st 1954, in San Francisco. Her father was a music teacher and a conductor, her mother a contralto and a voice teacher. She played viola professionally until she was 26, when she found that her voice could be a better and richer way to express her musicality and secure her professional future. Lorraine would have a professional singing career of only 2 decades (1984-2006), interrupted twice by illness. She died from cancer on July 3, 2006, aged 52.

For harmonia mundi, Lorraine Hunt Lieberson recorded operas, oratorios and Handel arias, conducted notably by Nicholas McGegan. For Erato, she added the rôles of Rameau’s Phèdre and Charpentier’s Medea, under William Christie. Since her death, other taped live performances have been added to her discography, including two Wigmore Hall Live recitals and Peter Lieberson’s Rilke and Neruda Songs.

A formidable musician, a natural-born actress, she was at her best in roles of sacrificed victims, which didn’t prevent her from displaying a dark sense of humour. After having sung during the same evening Stravinsky’s Jocasta and Britten’s Phaedra, she once said: ‘Two suicides in one night! That’s right up my alley’.

“For those who loved Lorraine and her singing, and for those who have not yet heard her, my gratitude to harmonia mundi.” PETER LIEBERSON (b.1946, d.2011)

Handel's popular "Angels, ever bright and fair" from Theodora and "Scherza infida" from Ariodante remind us of her musical intelligence and vitality...The final tracks on each disc, Dido's Lament and "Bist du bei mir" from the Notebook of Anna Magdalena Bach, are almost unbearably moving in their characteristic simplicity and intensity. She is much missed.