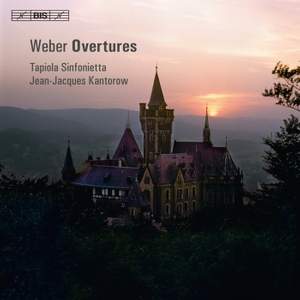 Although celebrated as the father of German Romantic opera, Carl Maria von Weber is today generally known for one opera alone: Der Freischütz. However the overtures of his other operas and music for stage plays have survived the test of time and are popular concert additions.

The present disc includes ten of these gems, from the overture to Weber’s first surviving opera Peter Schmoll und seine Nachbarn – composed at the age of fifteen – to that of Oberon, written in London for Covent Garden less than two months before his death from tuberculosis, aged 39.

The team of Jean-Jacques Kantorow and the Tapiola Sinfonietta have recorded numerous discs for BIS, by composers as diverse as Saint-Saëns, Mozart, Shostakovich and Rautavaara as well as Weber.