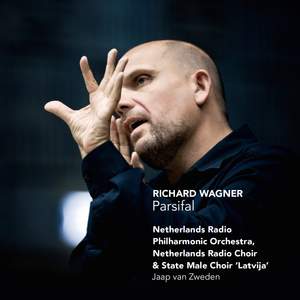 This new recording of Wagner's last work is in most respects very fine...Perhaps the main glory here is the superb playing of the Netherlands Radio Philharmonic Orchestra. It responds to every... — BBC Music Magazine, November 2011, More…

This live recording of Wagner’s opera Parsifal comes from a memorable concert that took place in the Concertgebouw in Amsterdam in December 2010. It is performed by the Netherlands Radio Philharmonic Orchestra, Netherlands Radio Choir and conductor Jaap van Zweden. The cast includes tenor Klaus Florian Vogt in the title role, celebrated bass Robert Holl as Gurnemanz, bassbaritone Falk Struckmann as Amfortas, and soprano Katarina Dalayman as Kundry. The set also includes a bonus DVD featuring video footage of highlights from the performance.

Although first conceived in 1857, Parsifal ended up being Wagner’s last opera production at Bayreuth in 1882. The story is loosely based on the legend of the Arthurian knight Sir Percival and his quest for the Holy Grail.

Born in Amsterdam in 1960, Jaap Van Zweden began his musical career as a violinist, becoming at 19 the youngest ever concertmaster of the Royal Concertgebouw Orchestra.

In 1997, van Zweden made the decision to conduct full time, and was named the chief conductor of the Netherlands Symphony Orchestra where he remained until 2003. In 2000, he added the music directorship of the Residentie Orchestra of The Hague to his credits, a post he held until 2005. Jaap van Zweden began his third season as music director of the Dallas Symphony Orchestra last year. His commitment to the orchestra was recently extended through the 2015-16 season.

This new recording of Wagner's last work is in most respects very fine...Perhaps the main glory here is the superb playing of the Netherlands Radio Philharmonic Orchestra. It responds to every demand of the score, under the inspiring baton of Jaap van Zweden, who seems to be the ideal man to conduct this incredible score...He has a mainly good set of soloists, with the veteran Robert Holl as a strong, moving Gurnemanz

It's hard to describe this live recording without descending into hyperbole...Jaap van Zweden retains magisterial control over the epic sweep of the piece. A uniformly excellent cast are on top form too: Klaus Florian Vogt (Parsifal) is powerful, shining and easy of voice, and he's matched by Katarina Dalayman (Kundry) on fiery form and the superb Robert Holl (Gurnemanz). Wagner performances don't often come more intense, epic or beautiful than this

This set is, I presume, the result of a single, concert-hall performance...Katarina Dalayman, Falk Struckmann and Klaus Florian Vogt do much to transcend the performance's oratorio-like ambience...the combined forces of the Netherlands Radio Choir and Latvian State Male Choir bring an appropriate weight of tone to a performance that certainly can't be accused of skating blithely over the great work's surface.

It's obvious that [van Zweden] has consciously opted to play down the story's pomp and stress the piety...We get playing of amazing warmth - a soothing bath of sound that implies godliness, devotion and tranquillity...[Holl's Gurnemanz] is a wonder of wisdom and insights...[Dalayman's] Kundry is a towering performance. Falk Struckmann's Amfortas is a truly damaged soul, his anguish the work of a truly great singing actor

[the] string playing in the Act III prelude is world-class in its depth of beauty of tone and emotional intensity...the Dutchman Robert Holl is probably the great Gurnemanz of our time, declaiming every word with feeling and singing gloriously for a man with a 40-year career behind him. Kundry is probably Katarina Dalayman’s most congenial Wagner role, feminine and voluptuous but with a high C to make you sit up in your seat.