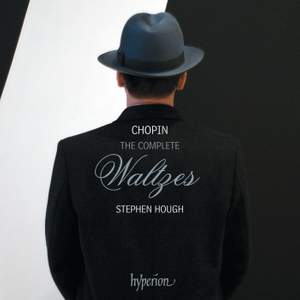 There is a absolute 'rightness' to his playing. His technical fluency and the lightness with which he moves over the keyboard is a constant source of joy...This is an album to be savoured for... — Classic FM Magazine, October 2011, 5 out of 5 stars More…

Stephen Hough has a unique affinity for the music of Chopin, whose music has always been a central part of his repertoire. His earlier Chopin recordings for Hyperion garnered huge critical acclaim. Hough’s name has become synonymous with pianistic elegance, flawless technique and immense musicianship and he has become globally renowned for his engaging and refined Chopin interpretations.

In his published Waltzes Chopin brought a new level of sophistication to this popular dance form. His unpublished Waltzes are generally less complex but display considerable wit and charm, qualities ideally suited to Hough’s pianism.

The disc is rounded off with the famous E flat major Nocturne, which gives a more lyrical expression to the metre of the waltz.

These illuminating and compelling performances are not to be missed.

There is a absolute 'rightness' to his playing. His technical fluency and the lightness with which he moves over the keyboard is a constant source of joy...This is an album to be savoured for years to come.

one sense how sensitive he is to Chopin's variety, in a corpus of music not generally recognised as being so various...He can charm and beguile, and be bold in his contrasts, but he gets on with it, and it is the music he gives us, with true sentiments, and not merely a take on received ideas. And what a lovely sound he makes - on a Yamaha, excellently recorded in a concert-hall acoustic.

Hough persuaded me that there really is something new and interesting to be heard in all 19 waltzes...Always, he captures the popular nature of the waltz idiom, while at the same time projecting the artistic elements that lie beneath the surface of the music, that make each waltz uniquely Chopin.

Each piece is exquisitely chiselled, sculpted and polished, but Hough never draws attention to technique for its own sake. He seems entirely possessed by the intoxicating spirit of the dance, heady with almost reckless sensory bravado.

Hough's playing has such authority and panache, its balance between virtuosity and vividly communicated expression so finely judged, that every perfectly scaled moment is as intensely realised as every other. Few other pianists around today play Chopin with as much understanding and poised mastery as this.

Hough brings an astonishing range of touch to them. All those sophisticated inner parts and harmonic shifts are brought out with the greatest insouciance and style. Impishly, he ends this disc with a nocturne, Op 9 No 2, as if to show that it is actually a waltz in disguise.

You don’t just hear Hough’s fingers; you hear his soul...The Minute Waltz contains one of the best melting moments of all; I could feel my knees giving way. His voicing of polyphony and variety of tone are equally special, with hues cleanly balanced, from diamantine sparkle to moonlit hush...One of the set’s joys is the spectacle of Chopin constantly varying the genre’s ingredients