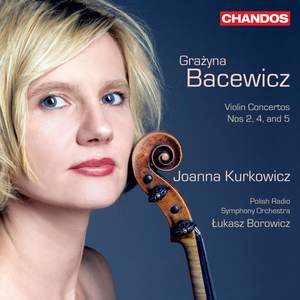 what impresses most, throughout, is Bacewicz's continual inventiveness: she displays vital rhythmic energy in her fast movements and penetrating expressiveness in the slow ones...Anyone who loves... — BBC Music Magazine, October 2011, More…

This is Volume 2 in our series devoted to the music of Grażyna Bacewicz who was regarded by Witold Lutosławski as ‘a distinguished Polish composer of the twentieth century and one of the foremost women composers of all time’. Bridging the gap between the neo-romanticism of Karol Szymanowski and the modernism of Witold Lutosławski, she deserves much wider recognition than she has received to date outside her native country of Poland.

The first volume was released in 2009 to worldwide critical acclaim, and the same strong partnership that achieved glowing accolades for the first volume here performs the stylistically diverse and technically brilliant Violin Concertos Nos 2, 4, and 5. On this recording, the Polish Radio Symphony Orchestra under Łukasz Borowicz is once more joined by the soloist Joanna Kurkowicz on a Petrus Guarnerius violin dating from 1699.

Praised in Gramophone magazine for ‘disciplined virtuosity’, Joanna Kurkowicz enjoys an active and versatile career as an award-winning soloist, recitalist, and chamber musician. She has performed on many of the great concert stages of the world, including the Weill Recital Hall at Carnegie Hall, Jordan Hall, Boston, and the Große Saal, Salzburg, and has appeared as a soloist with the likes of the New Zealand Symphony Orchestra, Boston Philharmonic Orchestra, and the New England String Ensemble.

In the words of Joanna Kurkowicz, this recording project has been ‘a tremendous journey through the incredible music of this fascinating composer… deeply personal and satisfying’, and she continues: ‘These works are like rare stones. You have to find them but once found they shine brilliantly.’

what impresses most, throughout, is Bacewicz's continual inventiveness: she displays vital rhythmic energy in her fast movements and penetrating expressiveness in the slow ones...Anyone who loves the concertos of Szymanowski, Bloch, Martinu or Bartok will surely adore these works. Every one is a premiere recording, played with fire and passion.

All the first movements here have weighty matter at hand - the opening to the Fourth is especially portentous - yet Bacewicz's well-attested quickness of mind skips between subjects and moods like a distracted professor...I can't fault the technical address of Joanna Kurkowicz in thse first recordings but I wonder whether a less highly pressured approach would suit music that's quite intense enough on the page.