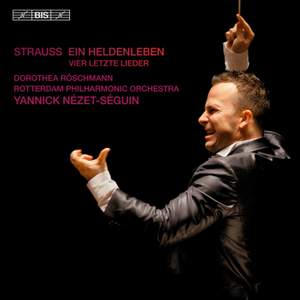 the gossamer textures of the Hero's 'War and Peace'...work best here, the bassoon stylishly leading the superb Rotterdam woodwind. The final retirement is gilded by a glorious horn solo...[Roschmann's]... — BBC Music Magazine, September 2011, 3 out of 5 stars/4 out of 5 stars More…

No. 3. Beim Schlafengehen (At Bedtime)

No. 4. Im Abendrot (In the Evening Glow)

On this the second of four projected discs for BIS, the Rotterdam Philharmonic here perform two of Richard Strauss’ most popular works: The tone poem Ein Heldenleben (A Hero’s Life) has often been described as an autobiographical work. The six interwoven sections describe themes of hope, love and courage, with a scherzo that mocks the hero’s enemies and a final climax that sees the hero withdraw from the world fulfilled.

The Four Last Songs were the last works that Strauss composed before his death in 1949, and throughout the works, the pervading mood is one of death and transience. The Rotterdam Orchestra are here joined by Dorothea Röschmann, who has built a reputation on the opera stage as one of the most admired present interpreters of Mozart and of lieder.

the gossamer textures of the Hero's 'War and Peace'...work best here, the bassoon stylishly leading the superb Rotterdam woodwind. The final retirement is gilded by a glorious horn solo...[Roschmann's] fast vibrato is offset by luminosity and soaring beauty...there's always understanding of the text, and the sunset epilogue, well accompanied by the orchestra, is moving.

Nézet-Séguin's portrait of the "Hero's adversaries" is piquant rather than ironically adversarial...[Four Last Songs are] gloriously sung by Dorothea Roschmann, who has a truly lovely voice, and is most sensitively accompanied...Even among many illustrious names, there is no finer recorded performance.

The multiple ironies of Heldenleben are superbly caught, though the emotional kernel of his interpretation lies in a sexy account of the central love scene and his touchingly beautiful treatment of the finale. The orchestral sound is lean and sinewy...[Röschmann's] voice lacks a little of its former lustre, though you can hear every word – and hear it given meaning.

This suave and efficient Strauss disc shows why Yannick Nézet-Séguin has rocketed to the first division of the conducting league.