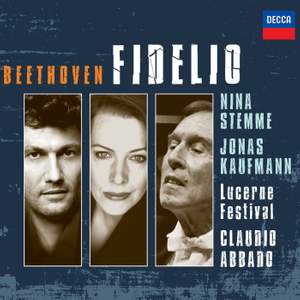 The real star of this performance...is the Lucerne Festival Orchestra, in whose hands the music seems to glow from within. The playing is thrilling throughout, with Claudio Abbado caressing every... — BBC Music Magazine, September 2011, 4 out of 5 stars More…

Recording of the Week,  Beethoven’s Fidelio from Abbado and Kaufmann

The German tenor is mesmerising from his very first note, whilst Nina Stemme is scarcely less compelling as his heroic wife Leonore in this exhilarating live concert recording from last year’s Lucerne Festival.

Recorded live at the Lucerne Festival 2010 with the Festival Orchestra, this Fidelio is led by the legendary conductor Claudio Abbado − making this release a major operatic event.

The central tenor role of Florestan is known as one of the most demanding and difficult in all opera. For his first complete opera recording for Decca, Jonas Kaufmann, “the world’s greatest currently performing tenor” (London’s Daily and Sunday Express), delivers everything the role demands: fearless tone, peerless style, and heart-stopping dramatic intensity.

The real star of this performance...is the Lucerne Festival Orchestra, in whose hands the music seems to glow from within. The playing is thrilling throughout, with Claudio Abbado caressing every detail of Beethoven's score...The Arnold Schoenberg Choir rises to the occasion, too, producing hushed singing of great beauty in the Act 1 prisoners' chorus...Kaufmann is a commanding Florestan. His opening phrase as he lies in the depths of the dungeons is spine-tingling.

Under Claudio Abbado’s assured direction, the Mahler Chamber and Lucerne Festival orchestras derive a fantastic amount of energy...[Stemme] manages to imbue her Fidelio/Leonore role with the requisite disguised anguish...High praise also must go to the spellbinding ensemble work...Jonas Kaufmann also impresses, most of all in his lachrymose opening to the second act...Due in part to the relative infrequency of recordings of Fidelio, this is one in particular to be cherished.

Abbado brings elegance to everything he touches. In the event, Kaufmann is superb, Stemme sings with technical control and warmth of tone, and Abbado conducts with exemplary clarity.

this is a “modern” Fidelio in so far as it espouses lightly pointed rhythms, transparent textures and attention to detail – but it also captures the hallowed glow of Beethoven tradition...Interest for opera fans lies primarily in Jonas Kaufmann’s Florestan: his aria, beginning on a thread of sound, is as much a meditation as a cry from the depths.

Abbado leads a viscerally charged performance that flies to the very heart of the matter...One of the many glories of this thrillingly articulated Fidelio is the playing of the basses and lower strings sharp-featured and black as the pit of Acheron...This is the best-conducted Fidelio since Furtwängler's; a joy to experience and a privilege to possess.

I could be in the minority when I state that I find this performance almost clinical...[Kaufmann] can do no wrong and, in fact, he does no wrong here, articulating his despair as well as his hope and desperation with great sincerity...Abbado is obviously going for a lean performance, and he succeeds; one hears things in both orchestra and vocal lines that are frequently smudged elsewhere.

My colleague Katherine would never forgive me if I didn't choose this live recording from the 2010 Lucerne Festival of Beethoven's only opera, conducted by Claudio Abbado and featuring the incomparable pairing of Nina Stemme as Leonore and Jonas Kaufmann as Florestan. His agonised cry of "Gott! Welch Dunkel hier!" after the slow orchestral build-up is astonishingly moving, and there's memorable support from Falk Struckmann as Pizarro and Christof Fischesser as Rocco.

From the opening flourishes of the overture, Abbado and his hand-picked festival orchestra arrest the attention...The ensemble-singing has the balance and synthesis which characterise the very best performances of Beethoven’s chamber-music...[Kaufmann's] first note alone is worth the price of the set...this is truly glorious, exhilarating music-making, and a superb document of one of the most thrilling live performances of 2010.

Abbado and his hand-picked Lucerne orchestra certainly do not disappoint here, as Beethoven’s epic score is delivered with drama and incandescence...Kaufmann’s thrilling Florestan emerges with a gut-wrenching cry from his dungeon. The set is worth sampling for him alone.

Abbado's contribution is without doubt extraordinary – a loving if slow interpretation, noble in its anguish and elation...An exceptional Florestan – arguably the finest since Jon Vickers's – from Jonas Kaufmann wonderfully conveys his moral greatness as well as the extremity of his suffering.

Abbado’s command of the score and its structure is consummate, the atmosphere palpable through his perceptive application of orchestral colour. The detail he elicits from his hand-picked Lucerne Festival Orchestra is phenomenal, the blend of sonorities aglow, the clarity of texture refined with a masterly touch.

Jonas Kaufmann’s first note alone is a good reason to buy this new recording of Beethoven’s stirring opera...The effect makes your jaw drop, your pulse pause, your hairs stand on end...Abbado conducts with magisterial but selfless understanding. In the overture alone (Beethoven’s punchy fourth version is used) you feel electricity and humanity in every jabbing rhythm and lyrically sculptured phrase.

The Independent on Sunday 24th July 2011

the instrumental performance is faultlessly sensitive to the drama it is illustrating. The singing is heroic, both from Nina Stemme as Leonore/Fidelio and Jonas Kaufmann as Florestan. Rachel Harnisch is a touching Marzelline, Falk Struckman a terrifying Don Pizarro.

this is a lean, chamber-sized account, every note precisely placed, but with enough punch for the drama to hit home...for superb technical playing, transparency of sound and with Stemme and Kaufmann in glorious voice, this is a Fidelio to treasure.