Recording of the Week,  Beethoven’s Fidelio from Abbado and Kaufmann

As my Presto colleagues would wryly confirm, I've been avidly awaiting this new Fidelio from last year’s Lucerne Festival for several weeks, greeting each morning’s post with an eager ‘Is it here yet...?’. Stumbling upon the Radio 3 broadcast of the live performance last summer, I was absolutely spellbound by the immaculate pacing, clarity and drama of what I heard and spent the next week zealously urging every opera-lover I knew to catch it on BBC’s listen again device – iplayer – so I was thrilled when Decca confirmed that it was to be released commercially. 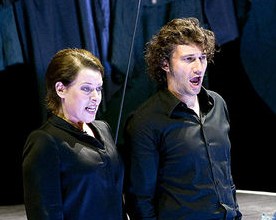 From the opening flourishes of the overture, Abbado and his hand-picked festival orchestra arrest the attention: despite the relatively brisk tempo, countless little details emerge which are glossed over on rival recordings, and the energy and care for countermelodies are carried over into the ensuing duet between the sparring Marzelline and Jaquino. The dialogue – often a stumbling-point on recordings – is delivered with absolute conviction and a total absence of staginess, and never feels like an unwelcome interruption.

It’s no backhanded compliment to say that Nina Stemme is almost more compelling in the spoken sections than when singing: she sounds convincingly masculine when playing ‘Fidelio’ with Rocco and his daughter (small wonder that Rachel Harnisch’s bright-toned Marzelline fell for this sultry-voiced young ‘jailer's assistant’!), and her barely-suppressed joy and anguish on discovering the identity of the high-security prisoner in the dungeon-scene are almost unbearably moving. Occasionally, a hint of shrillness creeps into the very upper reaches (a couple of moments in ‘Abscheulicher!’ might have warranted a re-take on a studio recording) but the voice is so lustrous and every phrase is so invested with character that it hardly matters.

Falk Struckmann, a celebrated Wagnerian baddie, avoids the one-dimensional barking of many Pizarros: there’s a terrible beauty to his big ‘vengeance’ aria (the chorus sound tangibly seduced by his presence in their interjections) and a charismatic authority in his dealings with Christof Fischesser’s Rocco, who veers between gruff sympathy for his prisoners and audible fear of the Powers That Be.

The ensemble-singing has the balance and synthesis which characterise the very best performances of Beethoven’s chamber-music, yet this Fidelio is dominated by the last character we meet, sung here by the mesmerising Jonas Kaufmann. His first note alone is worth the price of the set: his entry is virtually imperceptible, but the prisoner’s soft moan of ‘Gott!’ builds to a searing cry of anguish which had my hair standing on end (and, no doubt, my neighbours poised to bang on the wall!). Despite the innate virility and power of the voice, he conveys the starving prisoner’s physical weakness as well as his nobility and strength of mind – and at the end of a gruelling evening still fields clarion tone in the brief solos praising his ‘holdes Weib’ in the final scene.

The comparatively dark voices of the two protagonists won’t perhaps be to all tastes but, for me, are one of the selling-points of this recording – it goes without saying that both are in almost total technical command of these fiercely demanding roles, but there’s a palpable sense of effort which only reinforces the heroism of the characters. One tiny caveat: all applause (including a loud ‘Bravo!’ and noisy storm of shushing after Florestan’s aria!) has been edited out since the broadcast, which seems oddly anticlimactic after the blazing C major jubilation of the very end! It says much that this is my only reservation: this is truly glorious, exhilarating music-making, and a superb document of one of the most thrilling live performances of 2010. 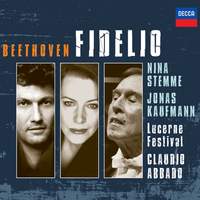