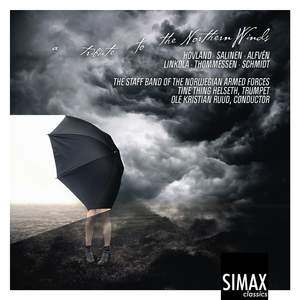 A Tribute to the Northern Winds

The Staff Band of the Norwegian Armed Forces is one of the most highly regarded military orchestras on the international scene. On this new album entilted “A Tribute to the Northern Winds” the band performs a collection of pieces by Scandinavian composers. It includes a trumpet concerto by Jukka Linkola which features the critically-acclaimed young soloist Tine Thing Helseth, as well as music by Sallinen, Hovland, Alfvén, Thommessen, and Schmidt.

In recent years the trumpeter Tine Thing Helseth has become one of the most sought after instrumental soloists in Europe, following her previous CDs for Simax, and . This winter she gave her debut recital in Carnegie Hall. On this new album she joins the Staff Band of the Norwegian Armed Forces in a performance of the Trumpet Concerto No. 2 by composer and jazz pianist Jukka Linkola. The music is playful and virtuosic, and is strongly influenced by the blues.

Renowned Finnish composer Aulis Sallinen incorporates his nation’s passion for the tango in a piece entitled ‘The Palace Rhapsody’. ‘Stabsarabesque’ was written for the Staff Band in 1974 by Norwegian composer Olav Anton Thommessen and has become one of his breakthrough pieces. Egil Hovland was also born in Norway and his ‘Fanfare and Choral’ is well known both in the version for symphony orchestra and in this original version for wind band. Hugo Alfvén is one of the most influential Swedish composers, and his Festival Overture is an elegant and heartfelt declaration of his love for the folk music of his homeland. Olé Schmidt was born in Denmark and is best-known for his work as a conductor. His ‘Homage à Stravinsky’ is a short three-movement piece written in 1985.