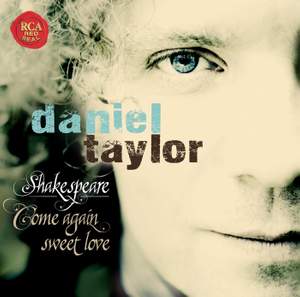 This is deluxe casting, allowing combinations from unaccompanied lute songs to an a cappella duet, and lute solos to five-part madrigals...Taylor - with one of the loveliest countertenor voices... — Gramophone Magazine, Awards Issue 2011 More…

Jones, Robert: Now what is love?

Purcell: If music be the food of love Z379A

Dowland: If my complaints could passions move

Shakespeare – Come again sweet love is a haunting collection of songs and madrigals by some of the great masters of the Renaissance period, including Purcell, Dowland and Gibbons. The theme of the album is “love” in all its many forms, expressed through the poetry of the Shakespearian Era and the music it inspired.

Daniel Taylor is joined on the album by the Theatre of Early Music (founded and conducted by Daniel Taylor) and famous soloists Dame Emma Kirkby, Carolyn Sampson, Michael Chance and Charles Daniels.

Daniel and the Theatre of Early Music appear in some 30 concerts every year. The ensemble consists of a choir and orchestra that are dedicated to sustain the heritage of magnificent yet neglected choral and instrumental repertoire from four centuries. Their recent performance could be seen on stages in France, England, Argentina, Brazil and China.

Daniel Taylor is a prolific recording artist who has worked on numerous albums including Sakamoto’s pop-opera Life with the Dalai Lama and Salman Rushdie, Renaissance duets with actor Ralph Fiennes, and Bach recitals with the Theatre of Early Music to name only a few.

This is deluxe casting, allowing combinations from unaccompanied lute songs to an a cappella duet, and lute solos to five-part madrigals...Taylor - with one of the loveliest countertenor voices in the business - is on nine [tracks], happy it seems to let others into the spotlight, with every other singer getting at least one solo spot.

Vocal leads and arrangements are shared: the results include a four-part madrigal setting of Gibbons' "The Silver Swan"; solo pieces accompanied by theorbo, such as Taylor's poised expression of a woman who "with such sweetness and such justice reigns" in Purcell's "By Beauteous Softness"; and tenor Charles Daniels's extended swoon of ardour through Dowland's "Come Again, Sweet Love Doth Now Invite".