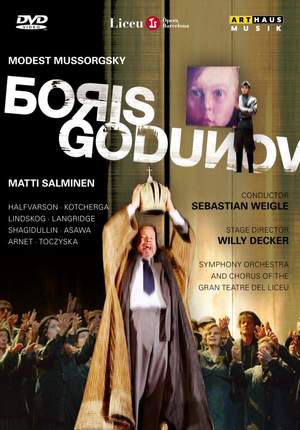 With this production of Modest Mussorgsky’s opera Boris Godunov, Arthaus presents the most famous and widely performed of all Russian music dramas on DVD. The libretto is by Mussorgsky himself and takes the eponymous “romantic tragedy” by the celebrated Russian poet Alexander Pushkin as its starting point. Boris Godunov is Mussorgsky‘s masterpiece and his only complete opera. It‘s a vast sprawling tapestry of Russian life, which centres on the Russian people - represented in the opera by a large and powerful chorus - rather than on the title figure. The staging presented on this DVD was produced at the Gran Teatre del Liceu in Barcelona and is based on the original version of the score, which comprised seven scenes written in 1868–9. Modern audiences are more familiar with a revised version with a re-orchestration by Rimsky-Korsakov, but this staging returns to Mussorgsky’s original intentions, which he was forced to revise due to political circumstances. The demanding title role is performed here by the Finnish bass Matti Salminen, a compelling singer-actor with a longstanding reputation on the international opera scene. With its mass scenes and frequent choir appearances, this staging confirms the Liceu’s excellent reputation as one of the leading opera houses in Europe.