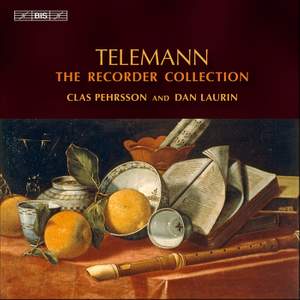 Telemann: Napolitaine TWV 41:B4 in B flat major

Telemann: Sonatina TWV 41:a4 in A minor

During his lifetime, Georg Philipp Telemann was widely regarded as one of the greatest composers of the period – perhaps the greatest of them all, not forgetting J.S. Bach or Handel.

All of this great range and variety is represented in his works for the flute. Telemann wrote for the recorder as well as for the transverse flute, but the music was intended for either instrument.

The greater part of that music – from solo fantasias and duets to concertos and double concertos – has been gathered in this boxed set, in highly praised recordings by two acclaimed Swedish recorder players: Clas Pehrsson and Dan Laurin. They are supported by continuo players in the chamber music, and by the eminent Drottningholm Baroque Ensemble in the concertos, and matched by soloists such as the acclaimed baroque bassoonist Michael McCraw.