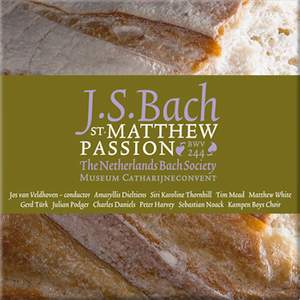 He has two quartets of soloists which also provide Choirs 1 and 2, but adds eight more voices to the first choir so the double choruses are unbalanced, 12 singers pitted against four. It's astonishingly... — BBC Music Magazine, May 2011, 5 out of 5 stars More…

Once again, the recording has been made in collaboration with the Catharijne convent Museum of Utrecht, so that this edition of the St. Matthew Passion is accompanied by a richly illustrated text book. This enables the listener to experience the Passion both in music and images. The illustrations are drawn from the unique collection of the Catharijneconvent Museum, which possesses the largest collection of liturgical art in the Netherlands.

According to conductor Jos van Veldhoven ‘there are reasons enough to look at the score in another way than the traditional symmetrical structure. (...) It could very well be a single choir passion based on hierarchy, rather than equality or symmetry (...) I decided to create a spatial arrangement by having a separate stage for each group of musicians, placed some ten metres apart. Some members of the audience even sat between the two choirs, experiencing the dialogue in a very special manner.

The recording was produced during live concerts in April 2010.

He has two quartets of soloists which also provide Choirs 1 and 2, but adds eight more voices to the first choir so the double choruses are unbalanced, 12 singers pitted against four. It's astonishingly effective...In the crowd choruses, where two choirs echo each other, they are curiously more real for their contrasting timbres... Türk, a fine Evangelist, describ[es] the action vividly but objectively, and leav[es] the emotional outpourings to the arias.

Veldhoven heigtens the contrasts in Bach's score by adding eight extra singers to the four Choir I soloists, and keeping Choir II a foursome. It's an effective device...Really, though, it's one for lovers of religious art, as the sumptuous booklet is rich with commentary and illustration of passion-related paintings.

The performance itself, directed by Jos van Veldhoven, has just what you would expect from a scholarly Dutch ensemble – all the modern trappings of early music practice (nine soloists doubling as chorus, plus eight additional singers) married to the sombre mood of Lutheran tradition.

The over-riding sensibility is one stripped of vanity and yet of astute and purposeful coloration, often through startling projection, compelling dynamic control and even rappresentativo-style singing...Gerd Türk is a subtle and excitable communicator, in whom tensions between pure reportage and discipleship are creatively harnessed. Harvey becomes master of all he surveys and the string accompaniments are exquisitely judged

What makes this performance of the St Matthew Passion not just revolutionary but an absolute must-have for lovers of this music - regardless of whether they like it fat or thin - is the sheer quality of the performance...as a glorious, life-affirming and utterly irresistable piece of music-making, this is in a league of its own. If any recording warrants the 'Outstanding' tag, this does