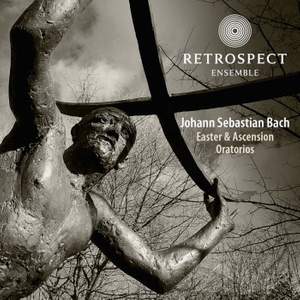 Oboist Alexandra Bellamy's phrasing and articulation illuminate the poetic content of the music, as does that of flautist Rachel Brown in her accompaniment of the extended soprano aria, tenderly... — BBC Music Magazine, May 2011, 4 out of 5 stars More…

This, the second release of the highly anticipated Retrospect Ensemble series, features the Easter Oratorio, one of Bach’s best-known oratorios and a monumental work, as well as the Ascension Oratorio.

This dynamic recording highlights the skill and brilliance of Bach's writing through the inspired story telling of its star soloists and the passion of the Ensemble.

This is the Ensemble’s second disc and follows its critically acclaimed debut recording of ‘Purcell Ten Sonatas in Four Parts’, a Finalist at the 2009 Gramophone Awards.

Retrospect performs regularly at Wigmore Hall and Cadogan Hall, London, and has appeared at major UK festivals including the Edinburgh International Festival and Norfolk and Norwich Festival.

Matthew Halls has established himself as one of today’s leading young conductors. A former Artistic Director of The King’s Consort, he has conducted in prominent venues throughout the UK and Europe.

Oboist Alexandra Bellamy's phrasing and articulation illuminate the poetic content of the music, as does that of flautist Rachel Brown in her accompaniment of the extended soprano aria, tenderly sung by Carolyn Sampson. That contemplative tenderness is equally realised by James Gilchrist in his lyrical slumber song with recorders...these are enjoyably relaxed and unselfconscious performances.

The excellent declamation, impeccable shaping of contrapuntal lines and flawless tuning of the Retrospect choir comes to the fore in the festive opening and closing choruses; the notably clean transparency between all four parts is achieved partly by an entirely male alto section but also by Halls's astute ability to convey each strand of vocal and instrumental detail.

This is highly impressive playing, neat, well disciplined but exciting, and Matthew Halls drives it along at a brisk pace, bringing into this music all the life-affirming joy and optimism which is at the very heart of Easter...This is a disc to savour and enjoy, not just for the sublime music but for performances which possess an immaculate feeling for style and a wonderfully fresh and vital delivery of both words and music.

With a choir of 18 and a period band of 26, this is relatively large-scale Bach, but the liturgical occasions for which both works were rearranged merit such lavishness, and the music-making is sumptuous, Halls and his trumpeters revelling in the celebratory clamour of Bach’s writing...Top-drawer Bach throughout, beautifully recorded and documented by Linn.

[The oratorio] for Ascension has always been popular, with its trumpet-dominated choruses and exquisite alto and soprano solos (Carolyn Sampson is outstanding here). The Easter Oratorio, with its strong narrative structure, has found less favour, but is so well done here as to quell all doubts about the libretto. Matthew Halls directs sprightly singers and accomplished players.

Get out your dancing shoes. Here’s Bach’s Easter Oratorio, pungent, brief and the most uplifting of all Easter’s musical memorials. It’s performed with expressive British soloists and superbly nuanced playing from Matthew Halls’s Retrospect Ensemble...Bach built both works out of the remains of previous pieces, but everything is transformed in glory by his genius. A disc to make your heart leap.