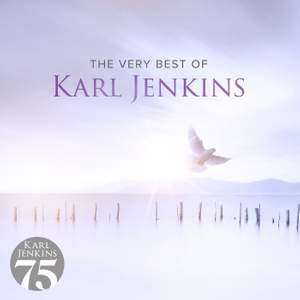 The Very Best of Karl Jenkins

I. The Proclamation: Gloria in excelsis Deo

VII. And The Mother Did Weep

IV. In These Stones Horizons Sing

Jenkins, K: The Wooing Of Étaín

Jenkins, K: Beyond The Century

Jenkins, K: The Armed Man - A Mass For Peace - Arr. for Piano

Karl Jenkins, who was awarded a CBE in 2010, is widely recognised as the world’s most popular living composer following a recent poll by renowned cultural commentator Norman Lebrecht. The Armed Man: A Mass for Peace is his most performed work, having been performed over 1000 times since its world premiere at London’s Royal Albert Hall in April 2000. Commissioned jointly by The Royal Armouries and Classic FM, it was initially inspired by the Kosovan conflict, but the clear message of hope this work brings to so many resounds even stronger ten years later. The piece regularly sits high in the Classic FM ‘Hall of Fame’ voted for by listeners, coming in at #15 in the latest poll, making Karl Jenkins the radio station’s best-loved living composer.

Born in Wales, Karl Jenkins studied the oboe and graduated from Cardiff University, followed by post-graduate studies at London’s Royal College of Music. A passion for jazz – he was a member of the bands Nucleus and Soft Machine – led him to composition. Classically trained, but drawing on a diverse range of global influences, his composing style has transcended musical boundaries, including memorable ad jingles for Delta Air Lines, the Cheltenham and Gloucester Building Society, De Beers diamonds, British Airways and Levi’s Jeans, the global ‘crossover’ phenomenon Adiemus, more ‘classical’ commissions such as Requiem, Stabat Mater, Quirk and The Armed Man: A Mass for Peace and television and feature film soundtracks. Recent recordings include Gloria, Stella Natalis and Joy to the World, Kiri Sings Karl with Dame Kiri Te Kanawa who received the prestigious Lifetime Achievement in Music Award at this year’s Classical BRIT Awards; Requiem and Stabat Mater.