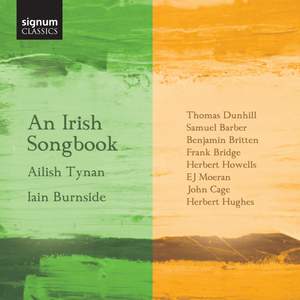 Soprano Tynan has a fresh, light, but powerful voice, which never distorts and uses vibrato sparingly. She relates symbiotically to Burnside...The disc is full of interest. There are lovely,... — Classic FM Magazine, June 2011, 5 out of 5 stars More…

Bridge: Lean out of the Window (Goldenhair)

Britten: The Last Rose of Summer

Britten: Sail on, sail on

Barber: The Desire for Hermitage

Britten: At the mid hour of night

Britten: Down by the Salley Gardens

Iain Burnside and Ailish Tynan return to Signum with their second disc of Irish Songs and arrangements: this time from a range of different 20th Century composers.

Although all of the sung texts stem from Ireland's rich heritage of literature (including poems from W.B. Yeats, Thomas Moore and James Joyce), the composers featured have a more transatlantic feel, with works by John Cage and Samuel Barber programmed alongside others by Benjamin Britten and Herbert Hughes. This disc continues Burnside’s series of recital discs with Signum – in particular his 2007 disc with Ailish Tynan of Irish songs by Herbert Hughes.

Soprano Tynan has a fresh, light, but powerful voice, which never distorts and uses vibrato sparingly. She relates symbiotically to Burnside...The disc is full of interest. There are lovely, unknown tunes, seductively sung and hauntingly harmonised. It has pathos and wild joy in equal measure. An excellent recital.

Typically, they all have distinctive accompaniments, some of them little related to the melodies at all...Predictably, Burnside is always a most sensitive accompanist, not least in some of Britten's tricky piano-writing. A most distinctive disc, well recorded and well worth investigating.