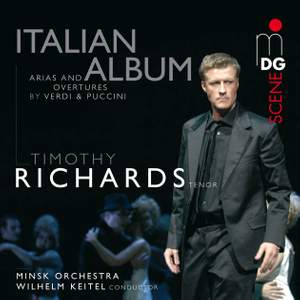 Arias and Overtures by Verdi and Puccini

This is Timothy Richards’ first solo SACD. This Welsh tenor has been enchanting the European opera public for the past ten years and is currently at the Comic Opera in Berlin and the Semper Opera in Dresden. He began his professional career as a rugby player but eventually studied singing at Royal Northern and made his debut as Alfredo in La Traviata at the Welsh National Opera.