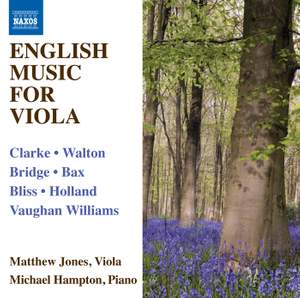 Holland, T: Suite in D for Viola and Piano

The fortunes of the viola as a solo instrument enjoyed a remarkable upsurge during the first half of the 20th Century. Rebecca Clarke’s Viola Sonata ranks among her finest compositions while Frank Bridge’s Four Pieces convey both melodic charm and elegiac warmth. Arthur Bliss’s Intermezzo, transcribed from his Piano Quartet (8555931) and William Walton’s Canzonetta and Scherzetto, originally for violin, complement Arnold Bax’s haunting Legend and Vaughan Williams’s posthumously performed Romance. Matthew Jones has been hailed by The Strad magazine as ‘a worthy successor to Lionel Tertis’. A major prize-winner from the Royal College of Music, Michael Hampton performs on major stages around the world.