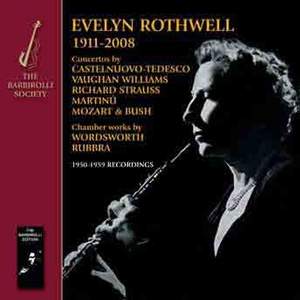 Martinů: Concerto for Oboe and Orchestra

Wordsworth: Quartet in D minor, for Oboe and Strings

This 2-CD set celebrates Evelyn Rothwell – Lady Barbirolli (1911-2008) and features rare recordings of her performing concertos and chamber works. The recordings originate from Lady Barbirolli’s own archive. Among the recordings selected for issue here it is good to find the Strauss Oboe Concerto, perhaps the greatest of the many concert for the instrument. Of her association with the Martinu concerto Evelyn was particularly proud. She was a friend of its dedicatee, the Czech player Jiri Tancubudek, and when he came over from Australia to introduce the concerto in Europe she was able to take over some of the performances he wasn’t able to honour, including its Proms première.

It is especially good to hear Evelyn and Barbirolli in partnership in the Mozart Concerto K314. They gave the concerto’s first performance in the version that the Austrian musicologist and conductor Bernhard Paumgartner arranged and edited of the work (previously known only as a flute concerto). After the Salzburg première Evelyn introduced it at the Proms with the LSO under Basil Cameron. The circumstances surrounding the various performances of Castelnuovo-Tedesco’s Concerto da Camera are somewhat confusing. The performance included here was given by the Barbirollis in a BBC studio on 6 October 1950, yet when Evelyn played it with the BBC Symphony Orchestra conducted by Sir Malcolm Sargent at the Proms a year later (31 July 1951) it was announced as its first performance in England (in the BBC’s 1981 history of its symphony orchestra as a ‘World Première’). In 1956 when it was announced that illness would prevent Barbirolli’s appearances at the Proms, it was George Weldon who deputised for him in Geoffrey Bush’s Oboe Concerto. Little need be said about Vaughan Williams’s Concerto: the Barbirolli’s enjoyed an extraordinarily warm friendship with the composer and his wife, musically rewarded in the most handsome way with the dedication to the conductor of RVW’s Symphony No.8. The old composer seemed to have a special affection for Evelyn’s playing of it: ‘We listened to your record the other night, and it is lovely. I cannot imagine anything better in the way of a performance ...’ he wrote to her.