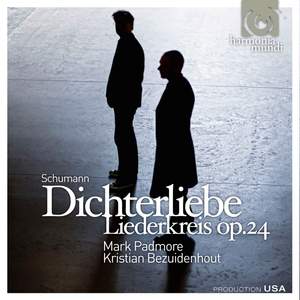 from a circumscribed palette Padmore draws an intense and startling range of colour...the evident intelligence and directness of both performers reaches an almost perfect unity of approach through... — BBC Music Magazine, Christmas 2010, 4 out of 5 stars More…

II. Was will die einsame Thräne?

Tenor Mark Padmore is deftly supported by fortepianist Kristian Bezuidenhout in this lieder recital of Heine settings by Robert Schumann and Franz Lachner (5 songs from Sängerfahrt). On October 27 Mark and Kristian perform this programme at Carnegie Hall. Here in the UK, Mark is singing Schwanengesang with Paul Lewis and Roger Vignoles during October whilst in November Mark and Kristian are at the Concertgebouw. Die schöne Müllerin is accompanied by Till Fellner in Germany and France and UK audiences have to wait until December 6 to hear Mark Padmore and Kristian Bezuidenhout perform Dichterliebe and Lachner’s Heine Lieder at London’s Wigmore Hall.

Bezuidenhout's second volume of Mozart will be released in January 2011.

from a circumscribed palette Padmore draws an intense and startling range of colour...the evident intelligence and directness of both performers reaches an almost perfect unity of approach through their mutually supportive expression

Padmore, a singer celebrated for his intelligent performances, superb diction, and ethereally pure voice, here surpasses even himself...Nothing is overstated and nothing forced...Bezuidenhout's accompanying is wonderfully responsive and atmospheric too...anyone who appreciates subtlety, detail, and the virtues of objectivity will be unable to resist.

Padmore's sweetness of tone is capable of growth and intensification, and he is sensible to the subtleties of modulation. Kristian Bezuidenhout...feels and thinks with the singer, makes his points without exaggeration and misses nothing

Bezuidenhout gets a wonderful sound out of his 1837 Erard. There is clarity and crispness, but it never sounds brittle. Meanwhile he achieves a richness of sound and colour which I didn’t think possible from such an instrument. Padmore is in excellent voice and both performers seem in perfect unity – Bezuidenhout feeling and breathing like a singer, and Padmore sensitive to all the subtle harmonies and modulations in the piano part.

Bezuidenhout plays an 1837 Erard...giving the kind of clarity and crisp articulation in the middle and upper registers that certainly gives an extra piquancy to the textures...Padmore's performances of both the Heine cycles are as restrained and as carefully enunciated and musically polished as one might expect, his tone almost disembodied at times

Padmore, in superb voice, brings a vivid new confidence to the German text ...and he and Kristian Bezuidenhout tackle those recital favourites "Mit Myrten und Rosen" (from Liederkreis) and "Ich grolle nicht" (from Dichterliebe) with a freshness that bears plenty of repetition.