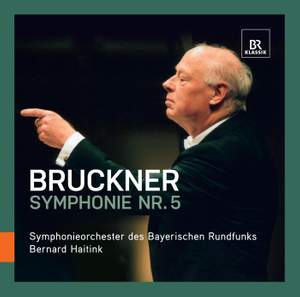 Haitink's well-nigh perfect grip on the work, and the magnificent playing of the orchestra, make this a memorable experience. The Bavarian brass are quite especially rich and deep in sound, while... — BBC Music Magazine, February 2011, 5 out of 5 stars More…

When people speak of Brucknerian “cathedral edifices”, then this description best applies to his 5th Symphony in B-flat major. This work ranks as a paradigm of the most complicated polyphony in symphonic writing and concurrently as a stirring confession of faith.

The yearning for divine light, for hope and faith – these ideas are communicated in the music and directly touch the listener.

This recorded concert document was made in January of 2010 during a guest appearance by Bernard Haitink, one of the most renowned conductors world-wide, with the Symphonieorchester des Bayerischen Rundfunks. The concert recording was made at the highest level of technology as a hybrid SACD with multi-channel and stereo sound.

Bernard Haitink, one of the most celebrated podium personalities of the present day.

Recent live recording from January of 2010 in the highest possible sound quality as an SACD.

Document of an enthusiastically received performance in Munich, the city with the special Bruckner tradition.

Haitink's well-nigh perfect grip on the work, and the magnificent playing of the orchestra, make this a memorable experience. The Bavarian brass are quite especially rich and deep in sound, while the strings, compared say with the Berlin or Vienna Philharmonics, are rather lean. This mixture is ideal in this work

the works if magnificently played by the Bavarian Radio Symphony Orchestra, and it's worth noting that the sound on this BR Klassik release is magnificent too. What impresses most is Haitink's conception of the piece. His view of the finale is not as heaven-storming as that of some of his predecessors, but instead there's a slightly gentler kind of exultation that I find extremely effective.

He brings his usual peerless virtues to the performance – a wonderful sense of spaciousness and an impeccable grasp of the work’s architecture. And what a sound the orchestra makes for him, with its glowing strings and warm woodwind. The brass deserve a special mention for the magnificent slabs of sound they throw out with utter confidence.