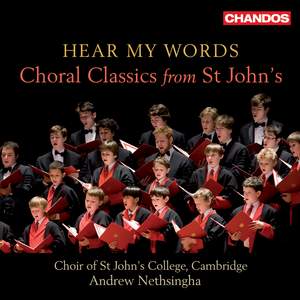 the poised, sentient performance of Allegri's famous Miserere opening the disc bespeaks dedicated preparation, both technical and spiritual. I like the spatial variegations drawn by [Andrew Nethsinga]...and... — BBC Music Magazine, Christmas 2010, 4 out of 5 stars More…

Rutter: O Lord, thou hast searched me out

As exclusive Chandos artists, the Choir of St John’s College, Cambridge here presents its second release. The first CD, of choral music by Howells (CHAN10587), was released to rave reviews in March this year. Choir and Organ wrote: ‘There is musicianship here of a rare and moving kind.’ This new release of popular choral classics should meet with a similar reception while at the same time appealing to a wider audience.

Established in the 1670s, the Choir of St John’s has a distinguished tradition of performing religious music. Its main duty is singing the daily services in the College Chapel during the University Term. During the University vacation the Choir carries out engagements in the UK and overseas, as well as undertaking a busy recording schedule. This particular release was recorded in the College Chapel in full surround-sound. The disc not only sounds spectacular, but recreates to an uncanny degree the experience of listening to the Choir perform in the chapel.

The music itself represents a time span of nearly 500 years of choral music. The earliest piece dates from the first half of the sixteenth century, and the newest was composed as recently as 2007. The styles and genres are varied, but there are clear links between the works throughout. For example, several are based on texts from the psalms, and the works by Pärt, Parsons, and Rachmaninoff offer three radically different interpretations of the Ave Maria. Some of the works also add a solo instrument to the familiar mix of voices and organ. But perhaps most importantly, all the pieces recorded here sit comfortably under the heading of ‘Popular Choral Classics’.

Allegri’s Miserere is counted among the great classics of church music. Part of its mystique stems from its origins; for many years the work was performed only in the Sistine Chapel, and as with other works tied to a single place it became an object for pilgrimage. In this case the pilgrims included Mendelssohn, as well as Mozart who famously noted down the work from memory after leaving the Vatican, thereby risking excommunication by the Catholic Church. This new release also features Stanford’s Jubilate, which was written for Trinity College, Cambridge. Intended as part of the service of Morning Prayer, it has long been one of the most popular canticles in the Anglican repertoire. In keeping with the text, Psalm 100, the tone is festive throughout.

the poised, sentient performance of Allegri's famous Miserere opening the disc bespeaks dedicated preparation, both technical and spiritual. I like the spatial variegations drawn by [Andrew Nethsinga]...and the unobtrusively pregnant phrasing of the tenor plainsong interjections...John's are a choir in fulsome health

St John's has a wonderful acoustic, neither too spacious nor too intimate, and in Andrew Nethsinga it has a director who knows how to fill every corner with grace and clarity...the choir sings suavely and radiantly without resorting to cathedral prissiness; the recorded sound is superb. A joy all round.

A word of reassurance to those who fear that this may be a "lovely" programme of hallowed pot-boilers...If these are indeed, as the title proclaims, "choral classics", that term must have been stretched to include all that is old and good...There are also pieces of modernity...The famous choir appear to thrive under Andrew Nethsinga's management.

It is with Allegri's impressive Miserere that the disc begins. One must congratulate those boys who rise well above their fellows...an admirable choir and a nicely varied programme.

The boy treble voices bring lustre and freshness to the sonority, and the singing throughout is stirring and polished.