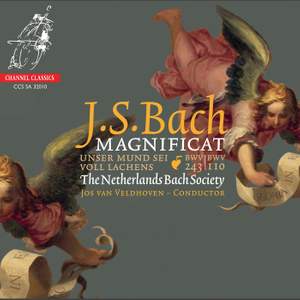 All the music on this CD is associated with the festival of Christmas. Bach wrote the cantata Unser Mund sei voll Lachens (BWV 110) for morning service on Christmas Day 1725, and the first version of the Magnificat in E flat major (BWV 243a) for Vespers on Christmas Day 1723, seven months after the Leipzig town council appointed him cantor of the Thomaskirche. It would hardly be exaggerating to say that Bach thus presented his visiting card to his new employer. According to the Bach scholar Christoph Wolff, the work is his "first really large-scale and complex piece of church music".

'Christmas was not the only occasion to sing the Magnificat text, however, for it was also a standard part of the Vespers liturgy. This may explain why Bach made a second version some years later (in D major, BWV 243). (...) For a Christmas CD in the year 2010 it is obviously attractive to add new movements to Bach's Magnificat, entirely in keeping with the tradition of the seventeenth and eighteenth centuries. His own choice, in the E flat major version, remains unsurpassed. By adding extra Christmas music to the second version in D major, however, a new and unexpected form arises which lends the performance a certain topicality. What is more, it gives us the opportunity to present Bach with several Netherlands composers of the seventeenth century. Jos van Veldhoven (from: liner notes)

[Mields and Zomer] both carry their verses with seasoned poise...the sepia-like "Et misericordia" finds a rare tenderness, and "Deposuit" from Charles Daniels is brilliantly executed...There's much to admire in the fruity and vibrant choral and instrumental ensemble of the Netherlands Bach Society.