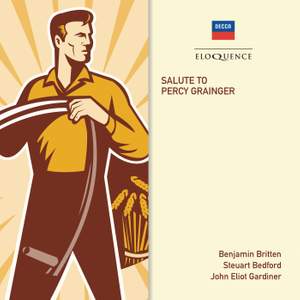 This two-CD collection includes Britten's classic 1968 recording, which is one of the best of all Grainger recitals in itself...Dazzling sound. — Penguin Guide, 2011 edition More…

Grainger: There was a Pig went out to Dig

Grainger: My Robin Is to the Greenwood Gone

Grainger: 'The Duke of Marlborough' Fanfare

Grainger: Under A Bridge

Grainger: Dollar and a Half a Day

Grainger: The Power of Love

Grainger: The Hunter in His Career

A composer with an extraordinary ear for sonority, original in his outlook, sometimes misunderstood, now revered, Percy Grainger is one of Australia’s most unique sons, and, in the words of Sir Peter Pears, one of its “most independent and single-minded spirits”. Many of these recordings, of vocal and chamber orchestra pieces, were made by Decca in 1968 and 1972 and issued, together with a 1927 recording of Grainger playing his Country Gardens and of Peter Pears and Osian Ellis performing Six Dukes wenta-fishin’ in two volumes, with the title Salute to Percy Grainger. The title is retained for this anthology and to it is added Sir John Eliot Gardiner’s Deutsche Grammophon recording of The Warriors, presenting nearly two hours of some of Grainger’s finest utterances in some of their earliest (and best) performances to be captured on record. Ten of these items [CD2: 1-10] make their first appearance on CD.

The performers are a Who’s Who of great Decca artists. Benjamin Britten and Steuart Bedford share the conducting duties on the Decca recordings, and the vocalists include Sir Peter Pears, Anna Reynolds and John Shirley-Quirk, together with the Ambrosian Singers and the Wandsworth Boys’ Choir. The notes are written by celebrities too – Sir Peter Pears and Grainger scholar, John Bird – and include affectionate reminiscences. Complete song texts are included.

"This is an altogether delightful anthology, beautifully played and recorded by these distinguished artists … the recording is an extremely good one” Penguin Guide ***

“the enchantments remain … will surely give pleasure” Gramophone

This two-CD collection includes Britten's classic 1968 recording, which is one of the best of all Grainger recitals in itself...Dazzling sound.

The performances by Britten, the tenor Peter Pears and the glorious baritone of John Shirley-Quirk, not to mention the Ambrosian Singers, Linden Singers and Wandsworth Boys’ Choir, have a finesse that defines an imperilled English musical tradition we are in danger of losing.