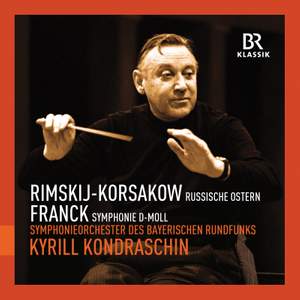 Single release of the 60th anniversary-box.

Kyrill Kondrashin and the Symphonieorchester des Bayerischen Rundfunks: what had been planned as a happy relationship between the significant representative of the Russian conducting school and the first class Munich ensemble ended tragically with the sudden death of the conductor before he could assume the position of Chief Conductor of the orchestra. All the more significant is thus this sound document. The live recording made at concerts in Munich’s Herkulessaal comprises an exciting program that juxtaposes two late romantic works from different symphonic cultures: Rimsky Korsakov’s “Russian Easter” Overture and César Franck’s only symphony, in D minor.

One of the few testimonies to the collaboration between Kyrill Kondrashin and the Symphonieorchester des Bayerischen Rundfunks.

An appealing juxtaposition of a Russian and a French work.