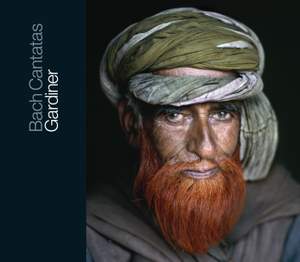 Gardiner with his characteristic sense of theatre imbues [the opening of BWV140] with urgency and anticipation. BWV 115 is masterly throughout. — BBC Music Magazine, Christmas 2010, 5 out of 5 stars More…

SDG is delighted to release Volume 12 - Cantatas for the twenty-second and twenty-third Sundays after trinity.

John Eliot Gardiner, The Monteverdi Choir and The English Baroque Soloists performed both of these programmes in England: at All Saints church in Tooting and at Winchester Cathedral, in November 2000.

The soloists include James Gilchrist, Peter Harvey and Joanne Lunn.

The highlight of this album is Wachet auf, ruft uns die Stimme (“Sleepers, wake”) – one of Bach’s best known cantatas, and one that has long been part of the Monteverdi Choir’s repertoire. It is described as “a cantata without weaknesses, without a dull bar, technically, emotionally and spiritually of the highest order”.

Ich armer Mensch, ich Sündenknecht (“I, wretched man, I slave to sin”) is Bach’s only cantata for solo tenor still in existence. It is sung movingly by James Gilchrist.

Of three cantatas on the parable of the unjust steward (BWV 55, 89, 115), Mache dich, mein Geist, bereit (“Prepare yourself, my soul”) is considered to stand out for its subtle instrumental writing and spellbinding arias, which evoke the yearning of the soul for divine mercy.

The recording in Tooting (CD1) is the only one in the whole series that wasn’t recorded live: the original concert took place in Eton chapel, right under the Heathrow airport flight path, so we had to try and recreate the same conditions in a quieter place.

This album is packaged with a separate index sheet of the Cantata series.

“One of the most ambitious musical projects of all time” Gramophone

Gardiner with his characteristic sense of theatre imbues [the opening of BWV140] with urgency and anticipation. BWV 115 is masterly throughout.

There are countless highlights in the final two volumes...Gillian Keith is gloriously assuaging in "Ich halte er mit dem lieben Gott" from BWV52.