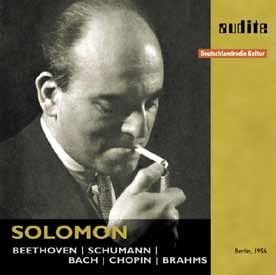 The 1956 RIAS recordings of Solomon, made shortly before the tragic end of his career, are benchmark recordings even today thanks to their sonorous lucidity and structural transparency. Archive releases of recordings made by the English pianist Solomon (1902-1988) are particularly noteworthy – partly due to the tragic turning point in the life of this exceptional artist. In 1956, during recordings of the complete Beethoven sonatas and following recordings of the piano concertos by Grieg and Schumann for EMI-Columbia, he suffered a major stroke which forced him into silence for the rest of his life. The music world was thus robbed of an eminent pianist and artist who, with his technically and creatively superior interpretations, always managed to penetrate the core of the musical message.

Solomon’s recordings of the classical and romantic piano repertoire document the highest artistic standing and, as such, take an immovable place in the history of pianism. This programme, recorded in February 1956 at the RIAS Berlin, is one of the last recordings made by Solomon. It is compiled in the same manner as his concert tours of 1955: two Beethoven sonatas form the centrepiece and are supplemented by works of Bach, Chopin, Schumann and Brahms.