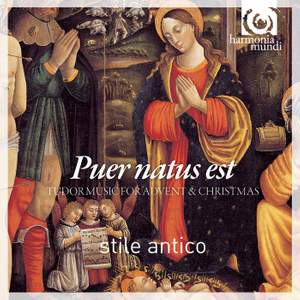 Conductorless Stile Antico may be, but they could never be accused of lacking direction or clear-sighted commitment to the works on this generously-filled album...The approach encourages long-range... — Classic FM Magazine, January 2011, 5 out of 5 stars More…

Stile Antico’s newest programme centres on Tallis’s magnificent 7-part ‘Christmas’ Mass, based on the festive plainchant Puer natus est, in a new edition prepared by Sally Dunkley. The mass is interspersed with seasonal Tudor music, including Byrd’s exquisite Propers for the fourth Sunday of Advent, responsories by Taverner and Sheppard, Robert White’s exuberant setting of the Magnificat, and Tallis’s own sublime Videte miraculum.

Matthew O’Donovan’s booklet note cannot be bettered in terms of historical context, analysis and relevance. Stile Antico is much in demand in concert, performing regularly throughout Europe and North America in repertoire ranging from English Tudor composers to the Flemish and Spanish schools and early Baroque. Their recordings on the harmonia mundi label have enjoyed huge success, and their release Song of Songs won the 2009 Gramophone Award for Early Music.

Conductorless Stile Antico may be, but they could never be accused of lacking direction or clear-sighted commitment to the works on this generously-filled album...The approach encourages long-range thinking about the music, inviting the ear to contemplate soaring architecture rather than surface detail.

this small group of singers rehearse and perform like chamber musicians, and the results are breathtaking - a beautifully blended, balanced and homogeneous sound while still giving direction and musical shape to the phrases...safe to say this is my absolute ‘must-have’ disc this Christmas.

Here is a disc full not of the joys but the mysteries of Christmas, the perfect corrective for the frenetic materialistic scramble it now is...The pure-sounding voices are exquisitely blended, and their broad pacing enables consistently shapely phrasing and clarity of line.

Surely the pick of the new CDs for Christmas this year, this exquisitely performed and beautifully planned disc is another winner for Stile Antico...what a sound: perfectly blended, carefully balanced, its sonorities reaching back effortlessly to conjure up a vanished age of devotion.

Stile Antico brings delicious balance and otherworldly beauty to this recording of music by Tallis, Taverner, Byrd, White and Sheppard. Listening will restore meaning to the holidays amid the retail onslaught.