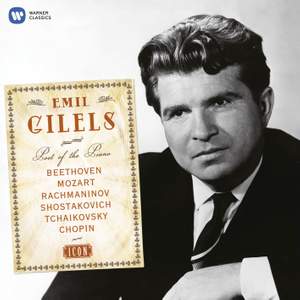 Emil Gilels started studying the piano at the age of six at the Institute of Music and Drama in his home town of Odessa. Following a successful debut in 1929 he moved to the Odessa Conservatoire and it was there two years later that Artur Rubinstein heard him and remarked “If he ever comes to America, I may as well pack my bags and go.” In 1933 he won the first prize in the first All-Union Musicians Competition in Moscow but he returned to complete his studies in Odessa and graduated in 1935.

He attended master classes with Heinrich Neuhaus in Moscow and heard (and later admitted to having been greatly inflenced by) many foreign artists in those years, including Petri, Cortot, Gieseking and Arrau.

Winning second prize at the Vienna International Competition in 1936 was followed by winning first prize at the Queen Elisabeth International Festival in Brussels in 1938. He started to teach at the Moscow Conservatoire and was due to have played at the 1939 New York World Fair, but the war intervened and it was not until 1947 that he gave his first concerts outside Russia – France, Italy, Switzerland, Belgium and Denmark.

It was in France that he made his first recording for EMI – the Saint-Saëns second concerto in 1954 which was followed a year later by the Rachmaninov third concerto and the Chopin second sonata. In that year he also became the first major Russian musician to play in the US after the war and his New York debut aroused much enthusiasm as did his first appearance in London during 1959.

Although he now had a international career he did not tour that often nor as extensively as other artists so his appearances were regarded as “events” and, as such, tickets were highly-prized amongst his numerous fans and the piano-cognoscenti. He stands with Sviatoslav Richter as the two greatest Russian pianists of his generation. His virtuosity always placed at the service of the music whilst the lucidity and purity of his pianism captured the very essence of what he was performing. This collection covers so many aspects of his art, encompassing works in which the poetry of the music is tangible and others where his incredible dexterity is matched by fluency to yield performances of breathtaking brilliance. His career was brutally cut short by a heart attack in Moscow just before his 69th birthday.