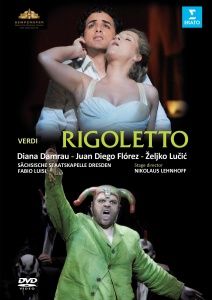 The singers are a distinguished bunch, with Željko Lučić the most sympathetic and pathetic Rigoletto I have seen or heard...[Damrau] sings gorgeously, and her acting is first-rate. Juan Diego... — BBC Music Magazine, More…

In June 2008, Giuseppe Verdi temporarily replaced Richard Strauss as the presiding genius at Dresden’s Semperoper as baritone Željko Lucic, soprano Diana Damrau and tenor Juan Diego Flórez came together for a new production of Rigoletto, directed by Nikolaus Lehnhoff and conducted by Fabio Luisi, chief conductor of the Semperoper, Dresden, General Music Director-elect of the Zurich Opera, and Principal Guest Conductor of the Metropolitan Opera.

The singers are a distinguished bunch, with Željko Lučić the most sympathetic and pathetic Rigoletto I have seen or heard...[Damrau] sings gorgeously, and her acting is first-rate. Juan Diego Flórez makes a convincing Duke...His narrow-bore voice turns out to be ideal for conveying the predatory hedonism of the character. In the Sparafucile of Georg Zeppenfeld we encounter a star in the making

Flórez uses his lighter-than-usual tenor to sing the role with high-wattage brilliance...the outstanding vocal performance comes from Diana Damrau as Gilda. More than Flórez, she sounds fully inside the role, shaping "Caro nome" with a control of tone-colour and phrasing that makes entirely her own...Zeljka Lucic brings dignity to the role of Rigoletto with his warm expansive singing.

Musically, the show is spectacular...Juan Diego Flórez is wonderfully sure of himself in every way...[Damrau] is no soubrette; the voice has body and power, her breath control is superb, and there is never a worry about the proper landing of a high note...[Lucic is] a superb Verdi baritone...understanding the composer's long lines and dramatic instincts

Filmed live at the Dresden Opera in 2008, Nikolaus Lehnhoff's production updates the action to the 1970s; Diana Damrau (all seething hormones and naive sensuality) and Juan Diego Florez (smarmy but endearing) makes a light-voiced but compelling pair of lovers, whilst Serbian baritone Željko Lučić balances savagery and tenderness to perfection as the tormented jester

Lehnhoff's production of Rigoletto is a ferocious, if uneven affair, that awkwardly positions the opera between religious drama and psychopathology...vocally [Damrau and Lucic have] rarely been bettered, while Flórez, cast against his squeaky-clean image, is insidiously sensual as the Duke. There's powerhouse conducting from Fabio Luisi, too.