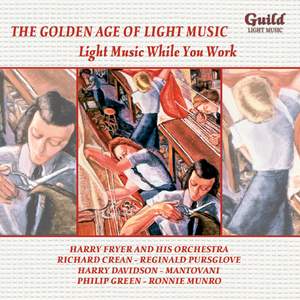 GALM 28: Light Music while you work

Chopin: Tristesse (So deep is the Night)

Gene Autry, Fred Rose, Bert Reisfeld, Michael Stoner: Be honest with me, You rhyme with everything that's beautiful

Allan Macbeth: Gaily through the World

Johann Strauss: Thousand and one Nights

Sherwin, M: Something In the Air' (Selection)

Early on in the Second World War the BBC in Britain used its radio services to boost the morale of millions of factory workers through a daily programme of non-stop music called "Music While You Work". During the periods when this show was not being broadcast, factories often played records on their own loudspeaker systems. Recognising the need for a series of discs offering catchy, tuneful music, in 1942 Decca started releasing 78s on a special 'Music While You Work' label, and many of these contained light music. A selection has been chosen for this CD, with popular orchestral and show music appearing alongside some true light music 'classics'.