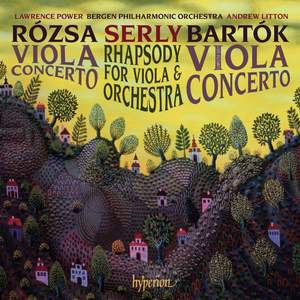 Power treats each piece on its own terms and the comparison turns out to be a telling one...[His] immaculate sense of line, and his charismatic sound, is a balm in Bartok's understated concerto.... — Classic FM Magazine, December 2010, 4 out of 5 stars More…

Serly: Rhapsody for Viola and Orchestra

The British viola player Lawrence Power continues to be acclaimed as one of the greatest performers of today. Together with Hyperion he is recording all of the seminal twentieth-century works for the viola.

Of the three Hungarian works for viola and orchestra on this latest release, the best-known is Bartok’s viola concerto, completed after the composer’s death by Tibor Serly. Serly was Bartók’s most constant and trusted Hungarian musicianfriend in his last years in the USA. William Primrose (who edited the viola part himself) was able to premiere Serly’s recension of the music on 2 December 1949, with the Minneapolis Symphony Orchestra conducted by Antal Dorati. Almost immediately it was recognized as one of the major contributions to the small literature of concertos for the viola, and has been a cornerstone of the instrument’s repertoire ever since. Serly’s own Rhapsody for Viola and Orchestra dwells somewhat within Bartok’s shadow, but is nevertheless a skilful and elaborate work with a rollocking finale. The disc is completed by a modern viola concerto by the film composer Miklós Rósza. The overall impression of the work is individual, darkly Romantic, and authentically Hungarian in inspiration.

Power treats each piece on its own terms and the comparison turns out to be a telling one...[His] immaculate sense of line, and his charismatic sound, is a balm in Bartok's understated concerto. This performance is up there with the best.

everything comes across with maximum impact - his agility at speed, his warm 'walnut' tone...and the innate musicality of his phrasing. Andrew Litton is in total command of every aspect of the score...An exceptional release in every way.

a wonderfully imaginative piece of record programming...The superb accounts of the Bartok concerto and Serly’s short yet compelling Rhapsody only enhance this set’s desirability.

Power’s supreme artistry fuels performances of works by composers who are linked...All are energised by the orchestra’s vigour.