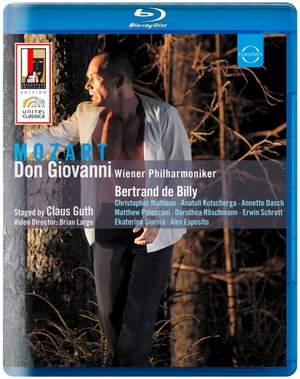 Christian Schmidt designs a crepuscular forest for Claus Guth's dark contemporary take on the opera...It's very much the women who have got a grip here. The rhythmic rigour of Dorothea Roschmann's... — BBC Music Magazine, December 2010, 5 out of 5 stars More…

Wild animals live in the woods. Robbers hide there. Mystery is at home there. And, when the woods are on the stage of Salzburg’s Haus für Mozart, a notorious ladies’ man and his unsavoury accomplice can also find shelter there. For here, in the dense forest planted by director Claus Guth, is the home of the rugged macho Don Giovanni, who, assisted by Leporello, lures the ladies with the heady scent of danger. In Guth’s almost cinematic Salzburg Festival production, every character in Mozart’s most realistic opera seems to carry a back-story of thwarted love and frustration. Everyone appears to be seeking either salvation or damnation in the woods – a compelling concept that removes the opera from its traditional pseudo-Seville squares and palaces.

And when Don Giovanni is played by Christopher Maltman, it’s no wonder that Donna Anna (Annette Dasch), Donna Elvira (Dorothea Röschmann) and even Zerlina (Ekaterina Siurina) are ready to throw themselves at his feet. With a physique as striking as his full-bodied baritone voice, Maltman embodies Don Giovanni as an almost reluctant seducer, a man fated to bring misery to women and, ultimately, to himself. Next to Maltman, it is Uruguayan bass-baritone Erwin Schrott who rivets the audience in this production: Schrott’s Leporello is an event in his own right, the event of the Salzburg Don Giovanni (Die Welt).

Under Bertrand de Billy, the Wiener Philharmoniker play with refreshing verve and spirit.

Christian Schmidt designs a crepuscular forest for Claus Guth's dark contemporary take on the opera...It's very much the women who have got a grip here. The rhythmic rigour of Dorothea Roschmann's Elvira splendidly embodies her fortitude...Giovanni and Leporello (superbly sung by Christopher Maltman and Erwin Schrott) are, by contrast, wrecks of men

Giovanni's story...becomes a tale of fighting against imminent death, and Christopher Maltman plays it with convincing desperation. The singing is uniformly excellent, the acting of a high calibre, and Bertand de Billy's fast tempi keep the action taut...a fresh take on a great work.

[Guth's] shabbily sombre, drug-fuelled, blood-bespattered take on Mozart's dramma giocoso (rarely indeed has the opera seemed less jocose) exerts a perverse fascination, not least for the interplay between the charismatic pairing of Maltman and Schrott...all the singers throw themselves wholeheartedly into Guth's Konzept.

The cast is top-drawer, with strong voices. There should be law against performing Mozart without Dorothea Röschmann, who here sings the crazed Elvira with real bite and zeal...Christopher Maltman and Erwin Schrott are two of the finest actors I've ever seen on an opera stage...They never break character and have clearly bought into Guth's interpretation hook, line and sinker

with its nightmarish woodland setting and pitiless examination of the anti-hero's disintegration, Claus Guth's 2008 Salzburg Festival staging puts me in mind of Lars von Trier, and comes complete with drug-fuelled junk-food binges and gore aplenty. Musically, there are rough edges, but it's worth it for the scorching performances of Christopher Maltman as the psychotic Giovanni and Erwin Schrott as an abject Leporello.