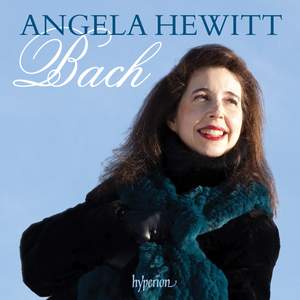 VI. Bourrée I and II

V. Bourrée I and II

V. Gavotte I and II

V. Menuet I and II

V. Passepied I and II

V. Gavotte I and II

IV. Menuet I and II

V. Menuet I and II

Angela Hewitt’s acclaimed recordings of Bach on the piano have received the highest critical acclaim and found their way into thousands of homes, selling nearly 400,000 copies since her recording of the Inventions burst onto the scene in 1994. Now for the first time Angela’s complete solo Bach is available as a boxed set of 15 CDs at a special price. A perfect gift for the few music-lovers left in the world who have not experienced these matchless performances; and for those who have, a chance to fall in love all over again.

‘Everything is right, everything is natural – this is Bach on the piano of the highest quality imaginable’ (The Guardian)

‘I know of no musician whose Bach playing on any instrument is of greater subtlety, beauty of tone, persuasiveness of judgement or instrumental command than Hewitt's is here’ (BBC Music Magazine)