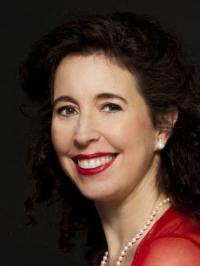 Canadian pianist Angela Hewitt was born into a musical family in Ottawa in 1958, and studied at the Royal Conservatory of Music in Toronto and with Jean-Paul Sevilla at the University of Ottawa. Early successes included prizes at the Chopin Young Pianists’ Competition, the Robert Casadesus International Piano Competition, the Dino Ciani Competition, and the Toronto International Bach Competition (which she won in 1985).

Hewitt is particularly noted for her interpretations of Bach: between 1994 and 2005 she recorded all of the major keyboard works on Hyperion, a project which has been described as ‘lightly articulated and elegantly phrased’ (Gramophone), ‘exquisitely precise’ (Classic CD), ‘a profound pleasure’ (Record Review), and ‘formidably on the ball’ (BBC Music Magazine). Her discography also includes Scarlatti sonatas, Rameau keyboard suites, Ravel’s complete solo piano music, and an ongoing cycle of Beethoven piano sonatas, all on Hyperion.

Hewitt’s awards and honours include Gramophone Artist of the Year (2006), a Royal Philharmonic Society Award (2003), a OBE (2006), and honorary degrees from numerous UK and Canadian universities.

Find out more at https://en.wikipedia.org/wiki/Angela_Hewitt