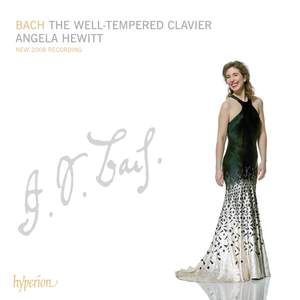 Hewitt…take full advantage of the piano's potential, including its middle (sostenuto) pedal; for that mighty tonic pedal below the final harmonies of Fugue in A minor. Her quiet sustained tone... — BBC Music Magazine, April 2009, 5 out of 5 stars More…

Ten years ago Angela Hewitt recorded a version of The Well-Tempered Clavier Book I which dazzled the critical world and record-buying public. It was followed shortly afterwards by Book II which was similarly received. Now, fresh from her Bach World Tour—in which she performed the complete Well-Tempered Clavier from August 2007 until the end of October 2008 in 58 cities in 21 countries on six continents—Angela has made an entirely new recording of this most iconic of keyboard works.

In a revealing and personal programme note, Angela explains her reasons, both artistic and emotional, for this momentous creative decision. She speaks of the ‘new-found freedom’ that she discovered in her later performances, and especially her use of Fazioli pianos, ‘whose luminous, powerful, and also ever so delicate sounds opened new worlds to me and allowed my imagination to take flight’.

This is an unmissable new release.

Hewitt…take full advantage of the piano's potential, including its middle (sostenuto) pedal; for that mighty tonic pedal below the final harmonies of Fugue in A minor. Her quiet sustained tone is as silky and restrained as a clavichord; the opening of the first Prelude is breathtaking, creating a sense of embarking on a sustained pilgrimage throughout the whole set.

Listening to Angela Hewitt's latest thoughts on Bach's Well-Tempered Clavier alongside her late- 1990s Hyperion cycle (reviewed below), it appears that her interpretations haven't changed so much as evolved, intensified and, most important, internalised. This perception is enhanced by a closer sonic image, plus the leaner, more timbrally diverse qualities of Hewitt's Fazioli concert grand that contrast with her earlier recording's mellower, more uniform Steinway. Yet one readily credits Hewitt's pianistic prowess for more acutely differentiated legato and detached articulation this time around, together with a wider range of melodic inflection. This adds considerable textural dimension to fugues whose close counterpoint is extremely difficult to voice and clarify.
Hewitt's uncommonly brisk and elegantly poised G sharp minor Book 2 Fugue has acquired conversational light and shade. Rubati hinted at earlier re-emerge in fuller, more purposeful bloom: compare both readings of the E flat major Book 1 Prelude and the E major Book 2 Fugue, for example. Perhaps one could pigeonhole Hewitt I as characterised by dance, while Hewitt II mainly celebrates song. While both versions hold equal validity and stature, Hewitt's remake ultimately digs deeper, with more personalised poetry. Perhaps she'll revisit the Goldberg Variations next?

Listening to Angela Hewitt's latest thoughts on Bach's Well-Tempered Clavier alongside her late-1990s Hyperion cycle (11/98, 7/99), it appears that her interpretations haven't changed so much as evolved, intensified and, most important, internalised. Perhaps one could pigeonhole Hewitt I as characterised by dance, while Hewitt II mainly celebrates song. While both versions hold equal validity and stature, Hewitt's remake ultimately digs deeper, with more personalised poetry.

As ever with Hewitt, the joie de vivre she finds in this music remains exhilarating. Even if you own her old set, this new one cries out to be heard.

What shines through her playing most of all is a sovereign control of touch, texture and dynamic, so that every line is perfectly characterised and distinct. This is by no means the only approach to playing Bach's masterpiece on a piano, as the historic, equally valid recordings by artists as contrasting as Edwin Fischer, Glenn Gould and Sviatoslav Richter demonstrate, but it's a measure of Hewitt's achievement that she invites comparison with pianists as great as those.

Fresh from her Bach World Tour - in which she performed the work in 58 cities in 21 countries on six continents - she has gone back into the studio (actually the Jesus-Christus-Kirche, Berlin) and made a new recording of this landmark work for keyboard...The result is a precious document, which draws upon her development as a person and a performer over the past 10 years. Playing of this ease and assurance rarely has such a profound understanding of the material. This is no mechanical journey through the cycle of keys. This is life itself.

Angela Hewitt's Bach has long been a thing of wonder...Her palette of colours is judiciously chosen, her variety of touch and dynamics gauged so that each prelude and fugue has a character of its own and contributes something special to Bach's iridescent kaleidoscope of musical invention.

The 2009 Hewitt — protean, humane, modern but respectful, beautifully recorded — was the version to live with. It would even sound good, I’m sure, on the BBC’s desert island.