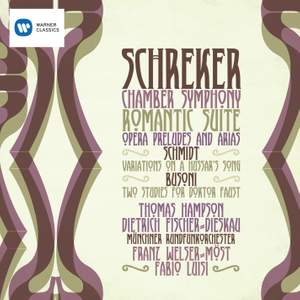 The multi-coloured orchestral world of Franz Schreker, with its flavour of French impressionism, is especially rich in the tone-poems based on two of his operas. There are similarities as well as contrasts with the more Hungarian sound of Schmidt’s exhilarating Variations, and the elegant, passionate austerity of Busoni’s Studies.This will be the fifth release in the 20th-Century Classics series from EMI Classics. Once again the depth of the EMI catalogue is amply illustrated by the range of music offered here: Gustav Holst and Ralph Vaughan Williams from England; Aram Khachaturian from Georgia; György Ligeti from Hungary; and Franz Schreker from Austria, all go to make up a fascinating release of five 2-CD sets.

Franz Schreker was one of a closely-knit group of young composers working in Vienna at the turn of the 20th century, most notable amongst whom was Arnold Schoenberg, Alban Berg, Anton Webern, Alexander von Zemlinsky and Franz Schmidt. The music of these five composers, particularly the first three, is far better-known than that of Schreker. Both Zemlinsky's and, to a lesser extent, Schmidt's music has gone through a revival on CD, but Schreker's name and music remain little-known. This is a pity because it is as fresh and appealing as any of his compatriots', some of whom fell under his influence. This 2-CD set begins with what is Schreker's best-known work, the Chamber Symphony, written in 1916, when he was reaching the height of his career. Success continued during the 1920s until the Nazis came to power, when many of his performances were cancelled and he lost his teaching posts. He died, after suffering a stroke, in March 1934. Anyone with a taste for late-Romantic music, be it by Mahler or the young Schoenberg can be assured that this is a set from which they will derive much pleasure.