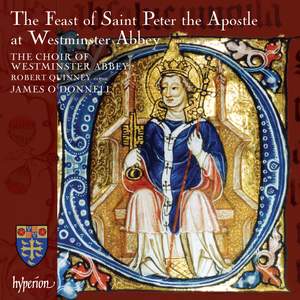 Offer, The Feast of St Peter at Westminster Abbey

The musicians of Westminster Abbey are in top form. Crisp phrasing, firm control of line and lumionous colours create many fine moments, notably in the Palestrina and in Byrd's Gloria. Under... — BBC Music Magazine, November 2010, More…

Radcliffe: The Preces and Responses

Radcliffe: The Preces and Responses

This disc contains music one might hear if visiting the Abbey on its patronal feast, that of St Peter the Apostle, which falls on 29 June. The programme broadly follows the structure of the three major choral services of the Anglican tradition, all of which can in turn be traced back to the worship familiar in the pre-Reformation period when the Abbey was a Benedictine monastery: Matins (or Morning Prayer); Eucharist (Mass); and Evensong (Evening Prayer). The two principal musical elements are William Byrd’s Mass for five voices, and, linking the morning and evening Offices, four movements from Charles Villiers Stanford’s Service in B flat. Also featured is Walton’s choral masterpiece The Twelve.

The musicians of Westminster Abbey are in top form. Crisp phrasing, firm control of line and lumionous colours create many fine moments, notably in the Palestrina and in Byrd's Gloria. Under organist Robert Quinney, the transcribed Bach Sinfonia sweeps along to a heady climax.

A sumptuous banquet of choral delight awaits the hungry listener, laid out in three carefully balanced courses, to be savoured slowly, the whole programme sung (and played) with superlative skill

this glorious disc from Hyperion celebrat[es] what the Abbey choir is all about...The centrepiece of the disc is Byrd's glorious Mass for five voices, superbly delivered in the performance of outstanding clarity and sensitivity under James O'Donnell.

This music for Westminster Abbey's patron, St Peter, offers a nimble, not to say ecumenical chance to unite contrasting choral works on one disc...The choir sounds best in Stanford's quintessentially Anglican Service in B flat and in Walton's The Twelve (1965)...Its flamboyant organ part and fugal "Twelve as the winds and the months" finale are intriguing and uplifting.

Stanford’s Te Deum and Jubilate from his B flat Service have become comparative rarities, and they make a terrific impact here, organ and choir combining with exultant, spine-tingling resonance...This is cathedral choral singing at its finest and most inspiring.