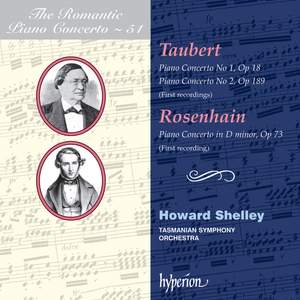 How [Shelley] manages to play these newly learnt scores with such conviction and apparent ease while conducting from the keyboard with such precision and sensitivity is one of the musical marvels... — Gramophone Magazine, September 2010 More…

The Romantic Piano Concerto series continues to surprise and delight with a 51st disc of 19th-century pianistic splendour. This new releases includes the two piano concertos by Wilhelm Taubert, as well as one of the two works for piano and orchestra by Jacob Rosenhain. Both composers were near exact contemporaries with Mendelssohn (born 1809), Chopin and Schumann (both 1810), Liszt (1811) and Wagner and Verdi (1813).

Taubert’s A major Concerto was described by Schumann as ‘one of the best’ – he also noted the parallels between it and Mendelssohn’s Op 25. But these similarities, however, do not negate the marvellous and distinctive music contained within Taubert’s Concerto. Nearly half a century separates Taubert’s first concerto and his Piano Concerto No 2 in A major Op 189 (c1874), and the second concerto reflects developments in the areas of harmonic expansion, cyclic development, and, of course, increased virtuosity.

Rosenhain wrote two concerted for works for piano and orchestra, an the A minor Concertino Op 30 (probably written in the 1840s, though published later), and the work included on this disc, the Piano Concerto in D minor Op 73. This work is fairly conservative in its form, offering little that had not been heard before. Still, there is much gorgeous and masterful music within its traditional three-movement form.

Howard Shelley directs the Tasmanian Symphony Orchestra from the piano; a partnership that has garnered the highest praise for their previous Hyperion recordings.

How [Shelley] manages to play these newly learnt scores with such conviction and apparent ease while conducting from the keyboard with such precision and sensitivity is one of the musical marvels of the age...The beautifully played serene Andante [of the Rosenhain] on its own is bewitching enough to make this disc unmissable

Bravo to Howard Shelley for learning these three piano concertos...Hyperion’s Romantic Piano Concertos series, now at Vol 51, is an invaluable archive of music