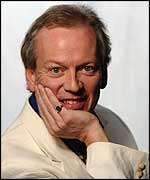 Since his highly successful Wigmore Hall debut in 1971 and a televised debut at the Promenade Concerts in the same season, Howard Shelley has consolidated his position as one of Britain's most outstanding artists, performing regularly in London's major concert halls and touring extensively abroad. As a pianist he has been soloist under the baton of such distinguished conductors as Ashkenazy, Boult, Davis, Downes, Gibson, Groves, Herbig, Marriner, Sanderling, Thomson, Weller and Jansons, and has given performances of important contemporary works with Pierre Boulez. Several composers have written concertos especially for him, all of which he has performed and broadcast.

Recording of the Week, Elmas Piano Concertos from Howard Shelley and the Tasmanian Symphony Orchestra

Katherine listens to a double-bill of new concerto releases from Hyperion, with soloists Howard Shelley and Bartłomiej Nizioł.