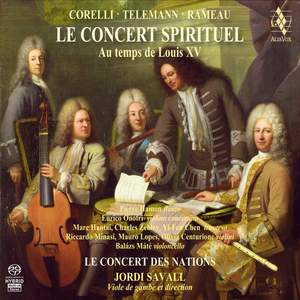 At the time of Louis XV

According to my good friend Wikipedia, the Concert spirituel was one of the first public concert series in existence. The concerts began in Paris in 1725 and ended in 1790. The series was founded to provide entertainment during Lent and on religious holidays when the other spectacles (the Paris Opera, Comédie-Française, and Comédie-Italienne) were closed. The programmes featured a mixture of sacred choral works and virtuosic instrumental pieces, and for many years took place in a magnificently-decorated Salle des Cent Suisses (Hall of the Hundred Swiss Guards) in the Tuileries Palace. They started at six o’clock in the evening and were primarily attended by well-to-do bourgeois, the lower aristocracy and foreign visitors. Jordi Savall brings these magnificent evenings back to life, thanks to an imaginary ‘concert spirituel’ programme featuring 3 major composers from Italy, Germany and France : Corelli, Telemann and Rameau. This album enables us to (re)discover the quintessence of the musical life during the reign of Louis XV. Enrico Onofri recently appeared at the Lufthansa Baroque Festival directing the European Union Baroque Orchestra and his own Ensemble Imaginarium.

The performances display characteristics typical of any under Jordi Savall's direction: richly toned, suave and confidently at ease with the style.