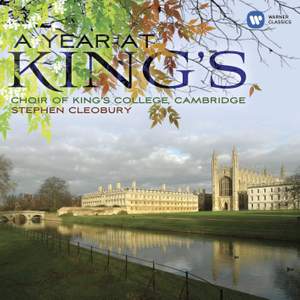 A Year at King's

Tavener: Away in a Manger

Eccard: When to the Temple

The paired ancient and modern settings represented on the album showcase the vast range of music that the choir performs each season reflecting Christ’s birth, death and resurrection through the festivals of Advent, Christmas, Candlemas, Lent, Easter and Ascension. The rest of the year, known as Ordinary time, is focused more on Christ’s ministry on earth.

A Year at King’s includes such favourites as Allegri’s Miserere and Barber’s Agnus Dei, an arrangement of his famous Adagio for Strings, as well as the first recording of Tavener’s Away in a Manger, written for King’s College Choir’s 2004 ‘Festival of Nine Lessons and Carols’. The rest of the programme comprises works composed between the 15th and 20th centuries by Palestrina, Pärt and Poulenc, Lassus, Holst, Guerrero, Eccard, Peter Philips and Stanford. The disc is rounded off with a spectacular performance of Tallis’s Spem in alium. On this, as on many previous King’s College Choir recordings, the conductor is Stephen Cleobury, organist and Director of Music at King’s since 1982.

King Henry VI founded King’s College in 1441. Six centuries later, these daily services in the magnificent chapel that is one of the jewels of Britain’s cultural and architectural heritage are the raison d’être for, and a central part in, the lives of the Choir’s 16 choristers, 14 choral scholars and two organ scholars.

The international reputation of the Choir of King’s College, Cambridge was established by the radio broadcast worldwide of the Festival of Nine Lessons and Carols each Christmas Eve, heard currently by an audience estimated in the tens of millions, and has been consolidated by regular international tours and by the critical and commercial success of its EMI Classics releases.

In recent seasons the Choir has travelled throughout Europe as well as to the US, South America, Australia and Asia-Pacific for performances at churches, festivals and cultural centres. Of course, the Choir also performs extensively in the United Kingdom, appearing regularly at all the major halls in London and in the regions, both a cappella and with orchestras. In 2009 they joined other Cambridge artists, ensembles and the BBC Symphony Orchestra under Sir Andrew Davis in a BBC Prom to mark the 800th anniversary of Cambridge University. This summer, they appear at the Cambridge and Chester Music Festivals, at the latter of which they perform two extracts from A Year at King’s.

Palm Sunday 2009 saw The Choir of King's College, Cambridge undertake a unique project in collaboration with Opus Arte and the Royal Opera House, Covent Garden. Under the direction of Stephen Cleobury and partnered by the Academy of Ancient Music, the Choir's performance of Handel's Messiah in King's College Chapel was screened live by satellite to cinemas throughout the UK, mainland Europe and Northern America. This first ever live broadcast of a choral concert anywhere in the world was undertaken as part of the King's Easter Festival as well as to celebrate the 250th anniversary of the death of Handel and the 800th anniversary of Cambridge University. The CD of this performance was released by EMI Classics shortly following the event and the DVD in November 2009.

King's Choir played a key part in the BBC’s new Easter schedule in 2010: BBC TV broadcast Easter at King's, an Easter service sung by the Choir and filmed in the Chapel; BBC Radio 3 broadcast two concerts from King's over the Easter period, James MacMillan's St John and a concert of sacred music with the Britten Sinfonia.

The most recent releases by the Choir, under exclusive contract with EMI Classics, include the 80th anniversary broadcast of A Festival of Nine Lessons and Carols; the above-mentioned Handel’s Messiah on CD and DVD; England, My England, a patriotic collection of English choral favourites that topped the UK classical artist charts and became EMI Classics’ UK best-selling title of 2009; and a stunning selection of Tudor anthems entitled I Heard a Voice.

"A crowning glory of our civilisation" Sir Peter Maxwell Davies

"I would happily sit in King’s College Chapel listening to this choir sing for the rest of my days." Richard Morrison, The Times

Allegri's Miserere brings an outstandingly involving interpretation to light, the stratospheric top Cs for solo treble not unduly spotlighted, and marvellously natural unison phrasing in the plainchant sections...[a] firmly recommendable introduction to how the King's choir sounds at present.

...highly proficient, taking easily in their stride the most elaborate polyphony and answering all the demands...The great motet by Tallis is heard in a new way, moving ahead with resolution and assurance.