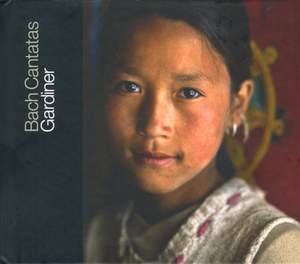 Peter Harvey offers an evenly sustained and crisply articulated account of the opening aria [of 162] while Sara Mingardo and Christopher Genz are pleasingly matched in their beautiful C major... — BBC Music Magazine, September 2010, 3 out of 5 stars More…

Cantatas for the twentieth and twenty-first Sunday after Trinity, recorded live in November 2000. John Eliot Gardiner, The Monteverdi Choir and The English Baroque Soloists head to Italy to give two concerts, one in the cathedral of San Lorenzo in Genoa and one the following day in the basilica of Santa Maria sopra Minerva in Rome.

We join John Eliot and his forces for the first of these two concerts - a performance of three little-known secular–imaged cantatas in the stunning Gothic cathedral of San Lorenzo. The soloists are internationally acclaimed and include Magdalena Kožená, Sara Mingardo, Christoph Genz and Peter Harvey.

The concert opens with the solemn BWV 162 Ach! ich sehe, itzt, da ich zur Hochzeit gehe (Ah! I see, now, that I have gone to the feast), a cantata brought to life by Salomo Franck’s strongly worded libretto. Bach thrives upon Franck’s love of poetic compounds and polar opposites. Nowhere is this more apparent than in the opening bass aria where we get references to life and death, rays of heaven and fires of hell.

There then follows BWV 49 Ich geh und suche mit Verlangen (I go and seek with longing), a dialogue cantata geared towards creating an atmosphere depicting the beauty of the soul. In his booklet notes, Gardiner states that the best movement is the fourth which he believes to be “a kind of early version of Bernstein’s ‘I feel pretty.’ ”

We then travel back to London for a concert in the Old Royal Navel College Chapel, Greenwich, a perfect architectural and acoustic setting. Bach composed four outstanding works for this Sunday, marvellously contrasted and subtly differentiated by mood and instrumentation.

The earliest of these, BWV 109 Ich glaube, lieber Herr, hilf meinem Unglauben! (Lord, I believe, help Thou mie unbelief), opens the concert. The wonderful opening chorus, a setting of words from St Mark’s gospel, emphasises the tension between belief and scepticism in such personal terms that one wonders whether it mirrors Bach’s own private struggles of faith.

This theme of distress and the yearning for forgiveness continues in BWV 38 Aus tiefer Not schrei ich zu dir (Out of deep distress I cry to you) where Bach, in the final chorus, emphasises this mood by giving all voices full orchestral doubling, including the rare usage of four trombones! After all that accumulated intensity, BWV 98 Was Gott tut, das ist wohlgetan, dating from November 1726, is exceptionally genial.

Peter Harvey offers an evenly sustained and crisply articulated account of the opening aria [of 162] while Sara Mingardo and Christopher Genz are pleasingly matched in their beautiful C major duet.

Gardiner spots the integrated features of portraying the soft and sensual loves "themes" over these two works...It's the tenor aria [of BWV188] that beguiles above all: a simple polonaise-like testament to the central place of trust. Again, Agnew is telling, and Bach's distillation of its emblematic motif uncannily knowing.

Stamina and passion remain at the highest levels in this instalment...The Genova concert (Cantatas 162, 49 and 180) features the young Magdalena Kozena among a first-rate team of solo singers...The Monteverdi Choir and English Baroque Soloists are incisive and expressive.

...the soloists – particularly the alto William Towers – were outstanding.