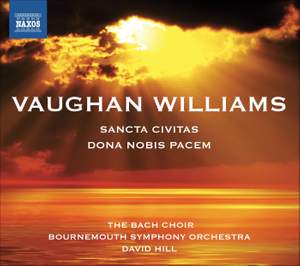 David Hill directs both these works with a strong sense of their overall shape…Anyone coming to these works for the first time through these recordings is unlikely to be disappointed. — BBC Music Magazine, May 2010, 4 out of 5 stars More…

The Angel of Death has been abroad

I was in the Spirit

And I saw Heaven opened

And I saw an Angel standing in the Sun

Babylon the great is fallen

Rejoice over her O Heavens

And I saw a new Heaven

Therefore are they before the throne of God

And I saw a pure river

Heaven and earth are full of Thy glory

Although Vaughan Williams described himself as ‘a cheerful agnostic’, he was not only steeped in the traditions of the Anglican Church, but sensitive to the mystical significance ‘of what lies beyond sense and knowledge’.

Written in 1936, his cantata Dona nobis pacem sets powerful Biblical texts alongside those by Walt Whitman and John Bright and is both a warning that mankind was sliding disastrously towards another war and a plea for a world without strife.

The oratorio Sancta Civitas, one of his most original choral works, strikingly deploys vocal and orchestral forces to depict the battle between good and evil from the Book of Revelation.

"Hill and his singers and players brought off the tone of the piece perfectly, conveying RVW's complex, polytonal vision in a capable performance… the singers were both thrilling in the louder moments and austerely beautiful in the quieter ones. The Bach Choir also supplied the polished chamber choir; Winchester Cathedral Choir and Winchester Quiristers supplied the atmospheric boys choir.” Music and Vision on a concert performance of the Sancta Civitas

David Hill directs both these works with a strong sense of their overall shape…Anyone coming to these works for the first time through these recordings is unlikely to be disappointed.

These performances under David Hill are fine, responsive to the beauty and the terror

[Vaughan Williams] would have appreciated these fine soloists, chief among them Matthew Brook, who turns anything he sings to gold. There are some beautiful moments in the Dona Nobis Pacem, with the choir and orchestra in serene form...VW devotees will find much to enjoy here.